Trump Asks Supporters To Back His View Of Judge Gonzalo Curiel 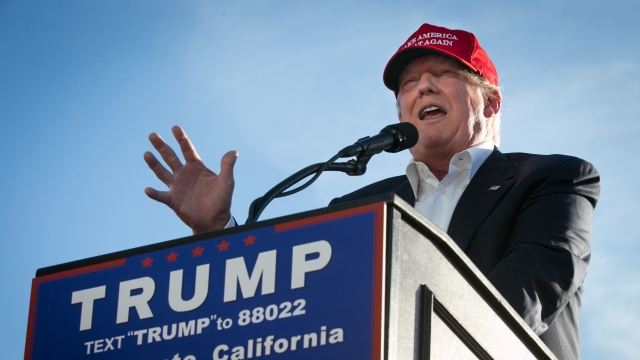 SMS
Trump Asks Supporters To Back His View Of Judge Gonzalo Curiel
By Katie Link
By Katie Link
June 6, 2016
His recent comments about the judge presiding over his Trump University cases have many GOP leaders angry.
SHOW TRANSCRIPT

"I have a judge that is a hater of Donald Trump. A hater. He’s a hater. His name is Gonzalo Curiel," Donald Trump said.

That was GOP presumptive nominee Donald Trump at a San Diego rally late last month. He’s not happy that a judge of Mexican descent is presiding over two of his Trump University cases in California. He claims the judge has a conflict of interest based on his ancestry and has called on Curiel to recuse himself.

"He's a Mexican. We're building a wall between here and Mexico. The answer is, he is giving us very unfair rulings, rulings that people can't even believe," Trump told CNN.

Well, now it seems Trump is ready for those people to start defending him. According to a Bloomberg report, Trump encouraged his supporters to "question the judge’s credibility and impugn reporters as racists."

The outlet reports that during a conference call on Monday, Trump said: "We will overcome. And I've always won and I’m going to continue to win. And that's the way it is." He apparently didn't seem interested in apologizing whatsoever.

The business mogul has churned up a lot of disapproval among GOP leaders in recent days following his repeated digs at Judge Curiel.

"The statements this week on the judge — that's a new level because it's not just ill-informed or ignorant statements," Republican Sen. Jeff Flake told MSNBC.

"This is one of the worst mistakes Trump has made. I think it's inexcusable," Newt Gingrich told Fox News.

Gingrich — who's a Trump supporter — goes on to point out that Curiel is an American and was born in Indiana. The Trump University trial is set for Nov. 28, which happens to be after the presidential election.