'A Sinister Deal': Donald Trump Lashes Out At Paul Ryan 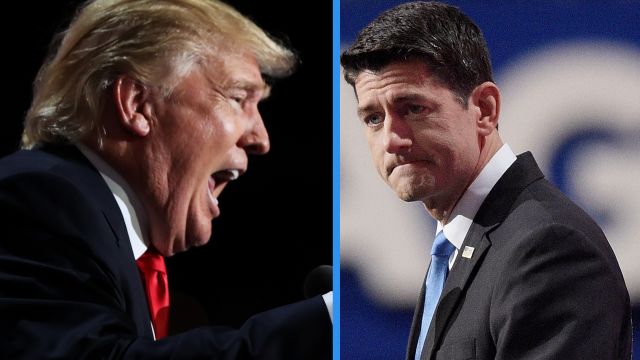 In case you missed it, Paul Ryan and Donald Trump are kind of on the outs right now.

That was Trump complaining Wednesday that House Speaker Paul Ryan didn't call to congratulate him on his debate performance against Hillary Clinton.

Ryan did make a call after the debate but not to Trump. Instead, he told his fellow House Republicans that he would spend the rest of the election focusing on helping down-ballot Republicans — not Trump.

Ryan is still technically endorsing Trump for president. But the release of Trump's obscene remarks about women has led many high-profile Republicans, including Ryan, to back away from the GOP nominee.

Trump's responded to the mass exodus by alternately lashing out at Republican leaders and claiming he doesn't need their help anyway.

Trump told Fox News' Bill O'Reilly: "The shackles are some of the establishment people that are weak and ineffective people within the Republican Party — senators and others and Paul Ryan. ... They don't give the support that we really need. Now, I think maybe I'm better off without their support to tell you the truth."

It's not clear what the "sinister deal" Trump was referring to is, but The Washington Post reports Ryan and Clinton didn't cross paths much during their time in Congress together.