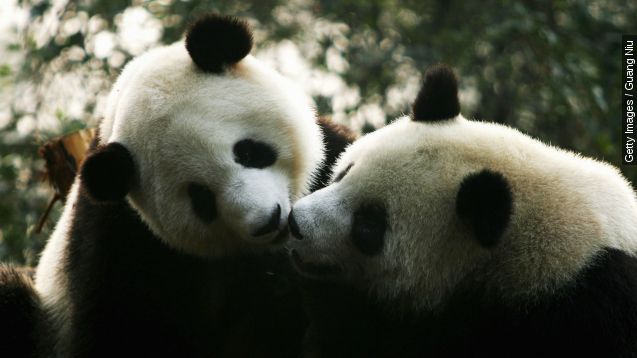 SMS
True Love Might Fix The Panda Mating Crisis
By Kaileen Gaul
By Kaileen Gaul
December 15, 2015
Pandas who are fond of each other have a much better chance of having a baby. This is good news for the reproductively challenged bear.
SHOW TRANSCRIPT

In the era of casual hookups and "hotline blings," pandas are looking for something a little more special when it comes to mating.

A study found giant pandas had a better chance of having babies when they chose their mate. (Video via NBC)

When both pandas were fond of each other, they had a 75 percent chance of having a cub. (Video via YouTube / Laocamb)

But even if a panda had a crush on a romantically ambivalent panda, they still had better odds of producing a cub than in an arranged mating scenario.

This study could help the panda pregnancy problem. One sanctuary in China even went as far as feeding their pandas Viagra to get them in the mood. (Video via Smithsonian's National Zoo)

And it doesn't help that female pandas only have a fertility window of 24 to 36 hours a year.

But if a boy panda can find that one special girl panda, we might be seeing more of them.

This video includes images from Getty Images and mrs.gsoell / CC BY ND 2.0.