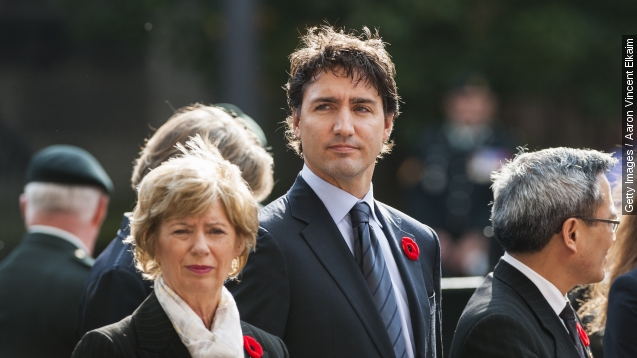 SMS
Trudeau On His New, Gender-Equal Cabinet: 'It's 2015'
By Bell Johnson
By Bell Johnson
November 4, 2015
Canada's prime minister welcomed a new era of liberal politics and gender equality by appointing 15 men and 15 women to his new Cabinet.
SHOW TRANSCRIPT

Canada's newest prime minister, Justin Trudeau, has made good on his promise for a gender-equal Cabinet by appointing 15 women and 15 men into his new inner circle. (Video via CBC News)

"Because it's 2015," Trudeau told reporters during a press conference.

Trudeau has promised a more transparent government with a Cabinet that represents Canada. Among new appointments, women are now filling the ministerial offices of environment, health and trade. (Video via CBC News)

With the new Cabinet, Canada has jumped from 20th place to fourth place, tying with France and Liechtenstein, for the percentage of ministerial positions filled by women, according to the Inter-Parliamentary Union. (Video via CTV)

Trudeau has already laid out his plans for what he'll accomplish before years end. He plans to recall Parliament to discuss tax cuts for the middle class and plans to withdraw jet fighters from the U.S.-led coalition against ISIS in the Middle East.