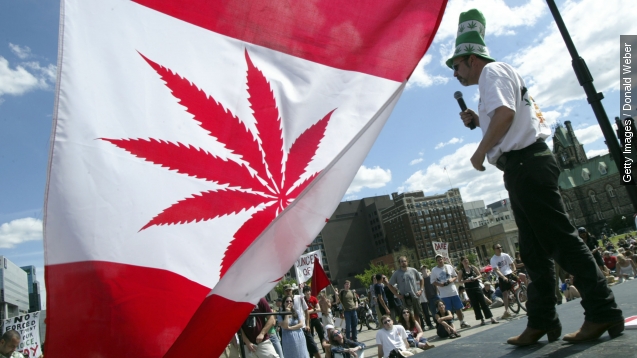 When Canadians overwhelmingly elected liberal candidate Justin Trudeau on Monday, the other big winner of the night may have been Canada’s marijuana industry.

"So the Liberal Party is committed to legalizing and regulating marijuana, controlling it in a way that is going to protect our kids and remove criminal elements from it," Trudeau said.

The day after the election, pot companies saw their shares grow anywhere between 7 and 40 percent.

Forbes reported that medical marijuana was expected to become a $1 billion industry in Canada by 2020. If legalized, it could jump to seven times that amount.

If Trudeau keeps his word, Canada would become the largest country in the world to fully support and regulate its recreational use. And that could have a ripple effect on the rest of the world.

The war on drugs has been a global effort since the 1960s when several countries, including the U.S. and Canada, agreed to combat drugs on a global scale.

But if Canada eschews the treaty by legalizing marijuana, it could prompt other countries — including the United States — to do the same.

Vox wrote that a move for legalization would "send a big signal to other countries — that, at least when it comes to marijuana, these treaties no longer hold the weight they once held."

While the Liberal Party certainly seems into the idea, they admittedly don’t have solid plans on exactly how they’ll implement any marijuana reforms.