Truck Driver Dangles For An Hour Over Bridge After Crash 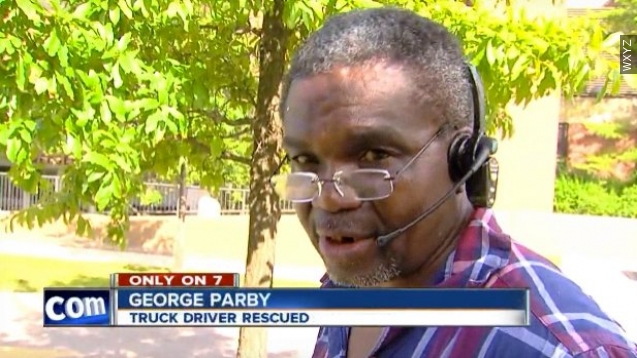 SMS
Truck Driver Dangles For An Hour Over Bridge After Crash
By Katherine Biek
By Katherine Biek
July 15, 2015
A truck driver skidded over an overpass in Michigan Tuesday and was left dangling for more than an hour before crews rescued him.
SHOW TRANSCRIPT

That's George Parby, the truck driver who dangled over a Michigan overpass for more than an hour after he tried to maneuver out of the way of a car in front of him that abruptly hit its brakes.

"I saw the red light behind the car and applied my brake and I started skidding left," Parby said.

"He says he swerved into the barrier to avoid hitting other drivers," WXYZ reporter Curtis Jackson said.

"The driver was dangling for an extended period of time inside the tractor, with the trailer acting as a counterbalance," Romulus Police Captain Joshua Monte told WXYZ.

"The Romulus Fire Department was able to utilize its bucket truck to get the driver out safely. Police tell us he was walking and talking, but where the driver was going and what he was hauling is still unknown," WJBK reporter Ingrid Kelley reported.

Newsy's partners at WXYZ say Parby was taken to the hospital but was later released.

The Detroit News reported hazmat crews were called in to clean up some spilled fuel from the crash. Roads were closed for much of the day but reopened Tuesday night.