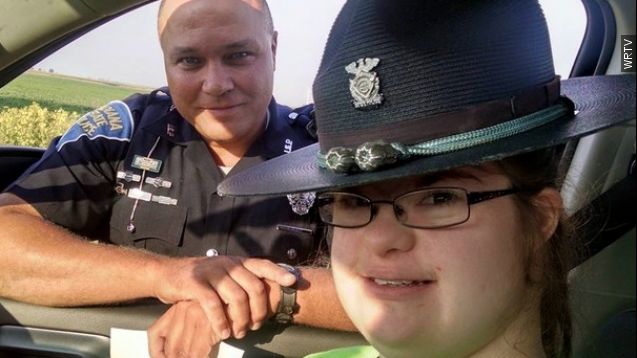 SMS
Trooper Lets Daughter Decide If Dad Gets Ticket
By Becca Dunn
By Becca Dunn
July 30, 2015
A father was pulled over for speeding in Indiana and the trooper asked the driver's daughter if he should get a ticket.
SHOW TRANSCRIPT

A father was pulled over for speeding in Indiana, and his destiny was put into the hands of someone unexpected.

"I went up to the daughter's side and gave her the opportunity to be a state trooper for about five minutes," trooper Darrick Scott of the Indiana State Police told WRTV.

Ashley Ellrich, with a state trooper's hat on and the power to make big decisions, said "yes" to giving her father a ticket.

"I was very surprised when she made that decision. It's just reassuring to know that there are people out there that are very supportive of law enforcement," said trooper Darrick Scott.

We're guessing her dad was a bit surprised by her decision as well. But trooper Darrick Scott decided to let him go with just a warning.

Ashley's dad posted this picture to his Facebook page and said he did slow down after that warning. He suggests we all do because "life is too precious."

The Indiana State Police Public Information Office shared his post, saying, "We are extra glad that Ashley is on our side!"