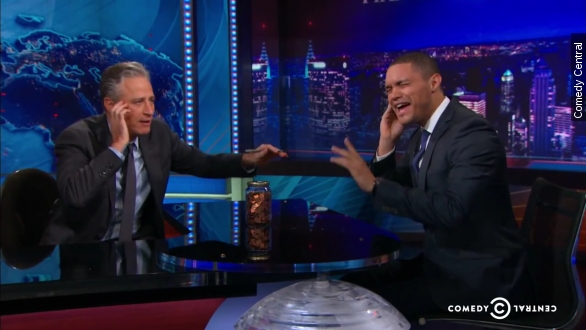 The news came first from The New York Times, which spoke to Noah and quoted him as saying, "You don't believe it for the first few hours. You need a stiff drink, and then unfortunately you’re in a place where you can’t really get alcohol."

"If ever this comedy thing doesn't work out, I've got poverty to fall back on. And I'm pretty sure I'll be cool there," Noah jokes in a documentary about his life called "You Laugh But It's True."

"Flying into America particularly has been the worst. ... Sir uhh South Africa. Have you been in contact with Ebola? Like my answer would be yes. Next stop Disney World!" he says in a stand-up act for a charity event put on by the organization Comic Relief.

"What is this fluid? What are these feelings?"

It's been more than a month since 52-year-old Stewart announced he was leaving the show after 16 years.

31-year-old Noah joined "The Daily Show in late 2014, and has made three appearances since. Not a lot, but the news is being received pretty well on social media so far.