Transparency An Issue In Wake Of Tianjin Explosions 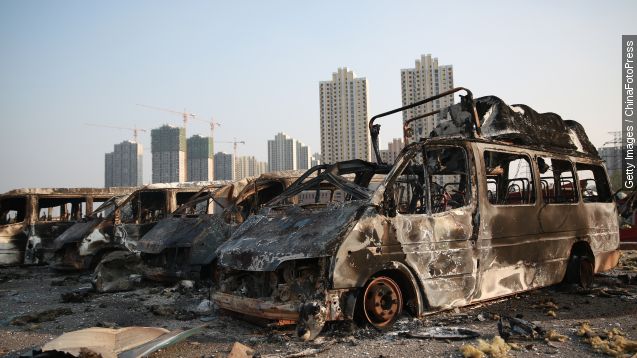 SMS
Transparency An Issue In Wake Of Tianjin Explosions
By Matt Moreno
By Matt Moreno
August 17, 2015
Media reports out of the communist nation can be tough to trust and often times conflicting on the explosions that killed more than 100 people.
SHOW TRANSCRIPT

Answers are still hard to come by after the massive chemical explosions in the Chinese city of Tianjin last week killed more than 100 people, injuring scores more. (Video via People's Daily)

In a rare event captured by Al Jazeera cameras, more than 400 protesters gathered Monday demanding compensation from the government.

"It's as if the police, the authorities have received orders from high up to show a bit of transparency," an Al Jazeera reporter said.

Over the weekend, officials confirmed the presence of sodium cyanide in the area, which if inhaled or ingested can be fatal.

Many of the dead and injured are firefighters and police officers who were first to arrive on the scene. The rescue headquarters told China's state-run news agency, "No rescuer has been made ill by chemical contamination since the warehouse blasts." (Video via New China TV)

But media reports out of the communist-ruled nation are tough to trust and often conflicting. Over the weekend, reports came out that the Chinese government both had and had not ordered evacuations from the city. (Video via BBC)

And then there's this from CNN shortly after the blast:

"Describe where it happened."

"We are the only nuclear biological rescue team in China. It was a really short notice that we were assigned to come to help, but we have been well prepared for the mission," an unidentified worker told CCTV.

Many people who lived nearby say they were unaware the warehouse contained dangerous chemicals. Dozens of rescue workers are still listed as missing.