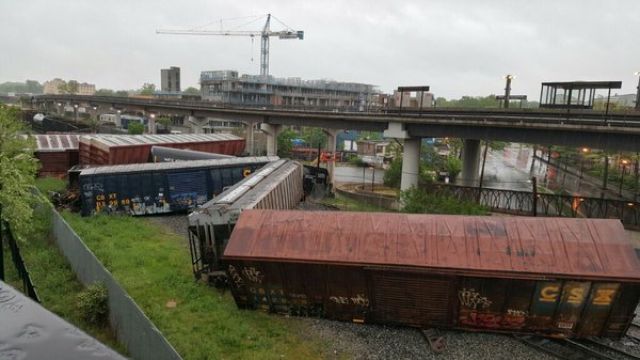 SMS
Train Derailment In Washington, DC, Prompts Hazmat Response
By Newsy Staff
By Newsy Staff
May 1, 2016
Officials say up to three of the derailed train cars are leaking a potentially hazardous material, and nearby streets have been shut down.
SHOW TRANSCRIPT

A train derailment and a potentially hazardous chemical leak are prompting concerns near Washington, D.C.

The train went off the tracks around 7 a.m. local time, and officials say up to three of the derailed cars are leaking. Officials didn't immediately say what exactly is leaking from the trains or how dangerous it might be.

WRC-TV, citing multiple sources, says one of the train cars is leaking a "lye-like" chemical, more commonly known as sodium hydroxide. The chemical can cause burns to skin.

Twitter user @ChrisNellum said he saw the train derail and that officials wouldn't allow him or anyone else to leave his building.

Nearby roads have been shut down and no injuries were reported.

This video includes images from District of Columbia Fire and Emergency Medical Services and Twitter / @ChrisNellum.