Tradition And Law At Odds Over Where You Lay Your Headstone 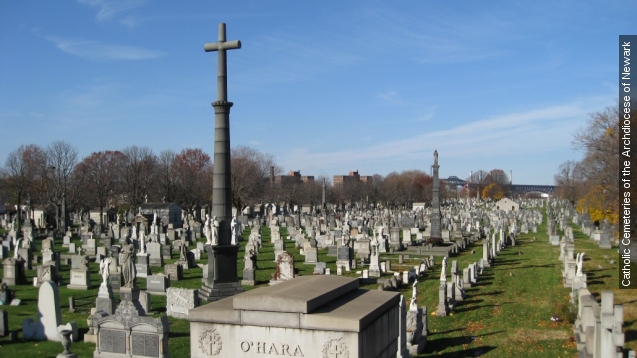 SMS
Tradition And Law At Odds Over Where You Lay Your Headstone
By Heather Adams
By Heather Adams
July 22, 2015
A New Jersey law bars the Archdiocese of Newark from selling its own headstones, but the union between the Church and grave markers is centuries old.
SHOW TRANSCRIPT

Earlier this year, New Jersey passed a law prohibiting the Archdiocese of Newark from selling its own headstones, and now the archdiocese is suing. But a church selling off headstones isn't new. And churches and cemeteries have a history of working together to lay the dead to rest. (Video via Institute for Justice)

In the mid-1600s, burial plots often seen at family homes became more common in churchyards. And the way graves were marked changed — from stones, rocks or wood to square-shaped tombstones made of slate or sandstone. (Video via Catholic News Service)

But by the 1830s, these sites were known for disease. They were overcrowded and expensive. These cemeteries were then placed outside the city limits, creating the rural cemetery movement. (Video via WTVP)

At this point, some churches were still able to offer these services, but cities took over most cemetery responsibilities and often appointed their own Cemetery Commission. (Video via WALA)

On July 17, 1862, legislation authorized the president to purchase land that would become national cemeteries. That year, federal government established 14 of them. (Video via The United States Army Band)

Today, this entwined history continues. Many churches still have their own cemeteries, with Catholic churches considering it a sacred place in canon law. And various religious symbols are often seen on headstones in both private and public sites.

But as today's cemeteries become overcrowded, traditions continue to change; some people have moved to green burials where headstones aren't always an option. That begs the question if churches and headstones — things of the past and present — have a future in burials. (Video via The Economist)