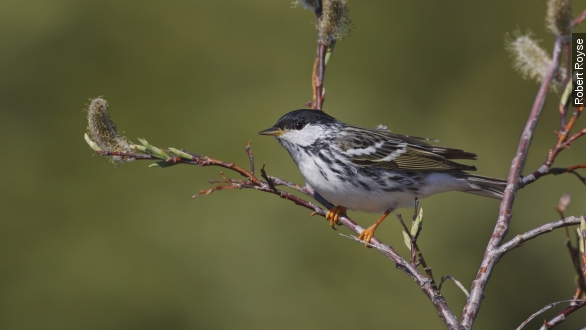 This unassuming little bird is a blackpoll warbler.

If you've ever flown across an ocean, you know how long it can take, and that's flying at some 550 miles per hour in a metal tube. (Video via British Airways)

The warbler makes a transoceanic flight every autumn with just its two wings to keep it in the air. (Video via Fundacion Conservacion Verde)

Scientists fitted several of the warblers they captured in Vermont and Nova Scotia with little geolocating backpacks and tracked where they went. (Video via SongbirdSOS Productions Inc.)

The warblers flew all the way from the northeastern corner of North America down across the Atlantic to the island of Hispaniola in one go — a journey of 1,500 miles, on average.

That leg of the trip alone takes three days of nonstop flight for a bird that's just 12 grams — the mass of a AAA battery.

After that stopover, the researchers tracked the birds' flight to the northern tip of South America, where they spend the winter. (Video via Fundacion Conservacion Verde)

In the spring, their trip back north to breed is a little easier. After flying through Cuba, the warblers fly overland across the Eastern Seaboard.

The researchers say the warbler's "extraordinary" journey south is rivaled by the slightly larger northern wheatear's overwater flight from the Canadian Arctic to the U.K. — around 2,000 miles.