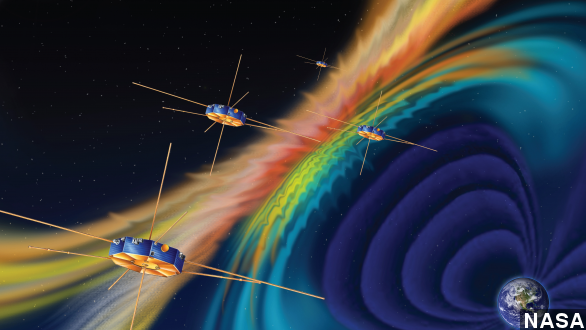 NASA’s Magnetospheric Multiscale Mission, or MMS, is on its way: a quartet of matched satellites launched Thursday evening aboard an Atlas V rocket. (Video via NASA)

Once the satellites are in place they’ll give scientists the best look yet at magnetic reconnection. (Video via NASA)

Magnetic reconnection occurs when a magnetic field, usually that of a celestial body, gets violently rearranged. When the sun’s magnetic field undergoes reconnection, for example, you get solar flares. (Video via NASA)

On Earth it contributes to the auroras. The phenomenon can also disrupt electronics and pose hazards to spacecraft or astronauts. (Video via NASA)

MMS has made it to orbit, so there can be a small celebration, but NASA’s engineers say it will take several weeks to deploy and arrange the quartet of satellites. Fully extended, the booms on each one reach 496 feet, or roughly across a baseball field. That's when the real science party can start. (Video via NASA)

MMS will study earth’s own magnetosphere as a sort of laboratory. The satellites’ orbit will take them both to the magnetopause, where earth’s magnetic field first encounters the solar wind, and to the tail of the magnetosphere behind the planet.

The data will help scientists understand how and why magnetic reconnection works in other celestial bodies, such as the sun or black holes. It could also help them predict solar storms, or improve magnetic containment systems in nuclear fusion reactors.

Measurements are expected to start in September, once the MMS satellites have been arranged in their final configuration.

This video includes images from NASA and music by Lasswell / CC BY NC 3.0.