TPP: Protests Over Something You May Never Have Heard Of 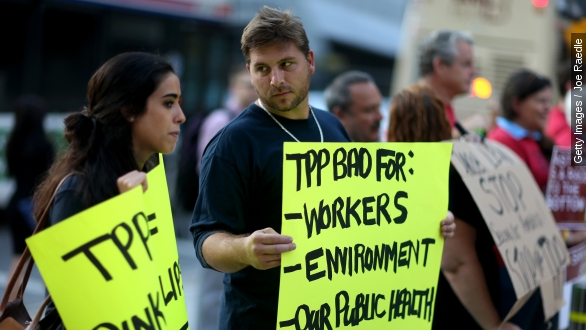 SMS
TPP: Protests Over Something You May Never Have Heard Of
By Cliff Judy
By Cliff Judy
April 18, 2015
Opponents of the Trans-Pacific Partnership scheduled protests involving tens of thousands of people this weekend. Here's why.
SHOW TRANSCRIPT

You may notice news coverage this weekend of people holding signs very much like these. The "TPP" plastered all over them stands for the Trans-Pacific Partnership, a massive trade agreement that made significant progress this week.

It's also a trade agreement so large and complicated it'd be unfair to expect the average American to be familiar with it, much less have even heard about it.

The TPP would form a working set of trade regulations among 12 countries around the Pacific, but not including China. Once the years-long negotiations wrap up, the Obama administration is quick to point out it would cover 40 percent of the world's total trade. (Video via The Brunei Times)

That's an enormous piece of the pie. As most any analyst will put it, businesses love the deal and labor groups hate it. Some of that's because corporations have an undeniably persuasive seat at the negotiating table, which protesters criticize as secretive. (Video via YNN & RT)

Others still have a bad taste in their mouths from the North American Free Trade Agreement — or NAFTA — President Bill Clinton pushed through in 1994 despite objections from labor groups and fellow Democrats. Critics say NAFTA led to the loss of countless manufacturing jobs to foreign countries with cheaper labor costs. (Video via William J. Clinton Presidential Library, PBS)

And the Trans-Pacific Partnership would dwarf NAFTA.

This week, Congress reached a "fast-track" deal allowing President Obama to negotiate the TPP and then present it to Congress for an up-or-down vote with limitations on adding amendments.

The AFL-CIO promptly scheduled more than 50 protests nationwide for Saturday.

The Obama administration has said passing the TPP will significantly increase exports for U.S. businesses, thereby helping jobs. One estimate predicts the partnership will add $77 billion to U.S. incomes by 2025. (Video via The White House)

But for all the drama, most think the actual economic impact of TPP to the everyday citizen would be modest. Vox points out that $77 billion added to our pockets still accounts for less than one half of one percent of U.S. incomes right now.

Perhaps the larger impact will be the precedent it sets. Vox's writer predicts TPP's supporters hope it "will serve as a blueprint for future trade deals that include other big economies, such as the European Union and China."