Tornado Season Set To Be Mildest On Record 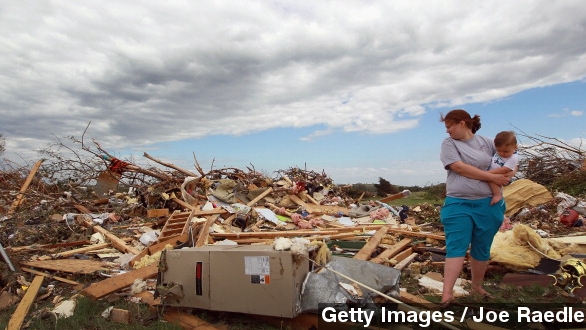 This U.S. tornado season is shaping up to be unusually mild overall, despite a rare tornado touching down in Los Angeles Friday.

"I heard this noise and like a whistling sound, and I heard this thunder like 'boom,'" one Los Angeles resident told KESQ.

Across the country, weather experts say 2014 is set to have around 400 fewer tornadoes than average, between 800 and 900 total, making it one of the calmest years on record — and this trend goes back several years.

"It's just getting more violent," said a storm chaser with KFOR.

This graphic from the National Weather Service helps put things into perspective. The last three years are all significantly lower than any period since the 1950s, with the next-lowest period occurring in the mid-'80s.

So has mother nature just been giving us a break or is there some other reason for the drop? In short — scientists aren't sure.

One popular theory is that low summer temperatures in 2014 might have played a role. One meteorologist told KRMG, "The less contrast in temperature and maybe not a quite as hot summer, that would generally tend to help things."

Whatever the reason, there's no sound way to predict the severity of a tornado season ahead of time, so it's impossible to say whether the trend will continue in 2015.

This video includes an image from the National Oceanic and Atmospheric Administration.