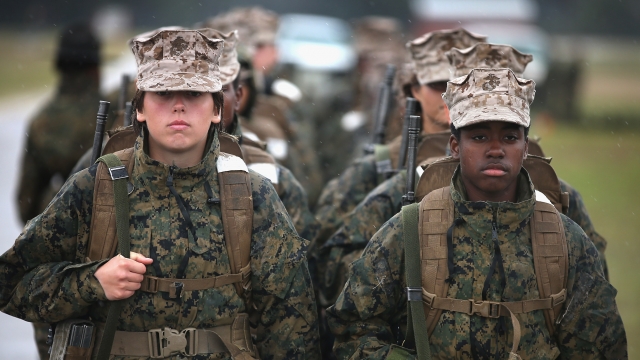 SMS
Top Military Brass Say Women Should Have To Register For The Draft
By Grant Suneson
By Grant Suneson
February 2, 2016
The top officers from the Marines and the Army told a Senate committee that women should have to register for selective service in case of a draft.
SHOW TRANSCRIPT

Now that women will have the ability to serve in any military role, some of the U.S.' top armed forces brass think it’s time for women to register for any future drafts as well. (Video via U.S. Department of Defense)

The top officers from both the Marine Corps and the Army told the Senate Armed Services Committee women should have to register for the Selective Service System.

Army Chief of Staff Gen. Mark Milley told the committee, "I think that all eligible and qualified men and women should register for the draft." (Video via U.S. Army)

This marks a change in tone for the Army. Last year, when asked if women should also have to register for the draft, Milley declined to comment. (Video via U.S. Department of Defense)

Milley and Marine Corps Commandant Robert Neller were commenting on an upcoming shift in military policy that will allow women into any service job, including strenuous roles like infantry or special operations, which women were previously barred from having.

The U.S. first implemented a version of the Selective Service System almost 100 years ago as the country prepared to fight in World War I.

As the law stands now, almost all physically able men in the country between the ages of 18 and 25 must register for the draft in case the Army is short on manpower. If someone doesn’t register, they could face a quarter-million dollar fine and a five-year jail sentence.

For now, this is all just talk and there are no solid plans in place that would require women to register. And even if they did, there's no reason to expect it would matter anyway. No American has been drafted since 1973 during the Vietnam War.