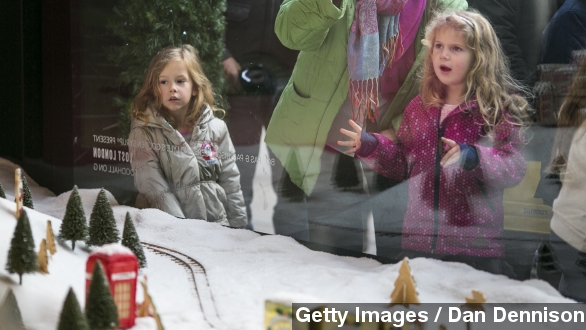 Deck the halls, roast the chestnuts and stand in line. That's right, it is undeniably Christmastime for millions of parents who are preparing for war this holiday shopping season.

"And then drop into a caterpillar crawl right to the doorbuster!" comedian Maria Bamford says in Target's holiday commercial.

So if you have a special gift in mind that little Timmy or Suzy just has to have, bad news: You're probably not alone.

Fortune has compiled a list of the top five gifts you and everyone else have been scouring the Internet for.

Well, no surprise here: The fifth highest-grossing film in history — which was released more than a year ago — is taking its victory lap this holiday season.

According to Experian Marketing, the search term "Frozen dolls" has "gained 181% in popularity on a week-over-week basis."

Frozen has even topped the all-powerful Barbie doll with 20 percent of parents planning to buy an Elsa or Anna rather than a Barbie and Ken. (Video via Mattel)

Next up, let your kid loose on a motorized scooter — because that's not dangerous.

The second most-searched toy on the list is the $200 Dareway, a scooter designed for kids who are 89 pounds or less and begging for a skinned knee. (Video via YouTube / FeberUSA)

According to Fortune, the toy first hit shelves in the U.S. two weeks ago and has already sold out three different times across the country.

Rounding out the list of most popular toy items this holiday season, the "Skylanders" video game series from Activision comes in at No. 3. (Video via Activision / "Skylanders")

Of course, there has to be a toy truck on the list — more specifically, the Max Tow Truck at No. 4, which can apparently tow 200 pounds. (Video via YouTube / Dad Does)

And lastly, the Xbox One, which has been searched more times than the PlayStation 4 but is significantly behind its competitor in sales. So merry shopping to all, and to all a good night. (Video via Microsoft)