Top 3 Zombie Stories To Frighten You This Week 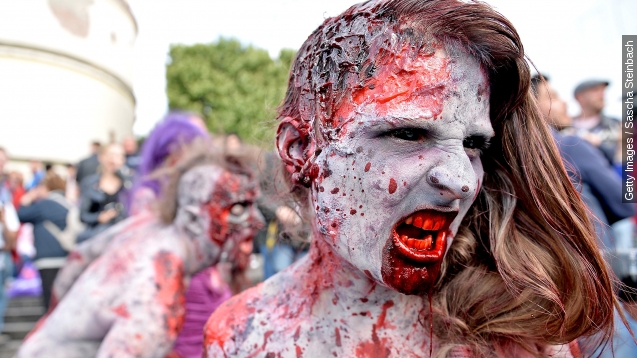 It's officially Oct. 31. Halloween. Which means it's totally acceptable to talk about zombies in everyday conversation and no one can look at you strangely for it. So that's what we're going to do:

First, one man in Washington state was driving in the carpool lane earlier this week when he was pulled over.

But instead of an actual human being in his passenger seat, the state trooper found this — a zombie baby in a pink onesie.

A public information officer for the Washington State Patrol District 1 told New York Daily News, "He did a good job dressing it up. He put some thought into it, but it was not hard to tell it was [not a] child."

While the state trooper didn't give the driver a ticket for not having his zombie passenger in a car seat — it was a zombie baby, after all — the driver was still cited $136 for illegally driving in the HOV lane.

"Powered by an insatiable hunger for human flesh, and below moderate intelligence, it's designed for all the important moments in your life. Delivered by a friendly handler right to your doorstep."

Now, unfortunately, this service was only offered in New York and San Francisco.

But customers were able to place an order for a zombie, get it delivered to them and then sic said zombie on whatever unsuspecting person the customer wishes. (Video via Lyft)

According to Lyft, the zombies were "free to attack, pose for selfies or drool all over your office carpet."

And finally, CareerBuilder set out to discover which cities in the U.S. would be able to survive a zombie apocalypse — a question we were all dying to find out the answer to.

The city we should all be flocking to right now is Boston. To come to this conclusion, the researchers looked at factors in four different categories: defense, containment, cure and food. Basically, there are a heck of a lot of doctors in the City of Champions, so theoretically at least one of them could discover a cure to zombie-ism.

And it turns out New York City is the last place you'd want to be if zombies ever actually become real and start attacking people.

There's just way too many people, so food would run out rather quickly. It also makes the rate of zombie contamination quite high.