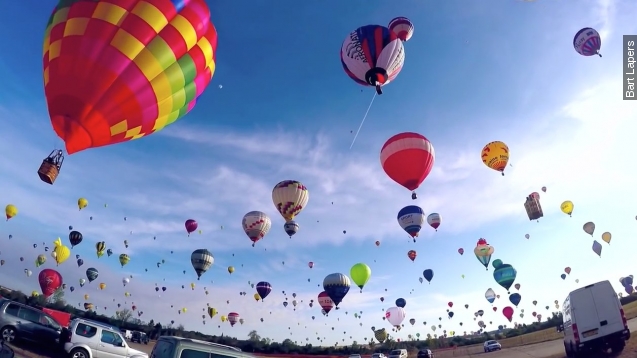 World records are set all the time. But they aren’t always captured on video — like the three we’ve rounded up for you today. Because getting the whole thing caught on tape is always better, right? Well, at least to prove to your friends and loved ones that you set a record.

First up, a new world record was set in France when 433 hot air balloons took off at the same time. (Video via Bart Lapers)

A travel blogger from Belgium managed to take video of all the balloons. It’s a pretty impressive sight.

This hot air balloon take off happens every year at the Lorraine Mondial festival.

And Quartz reports because it’s been done enough times, coordinators have learned to line up the balloons in a 3.8-mile long row so they won’t bump into each other.

Next up is a stunt we’ve never seen before.

Watch as this daredevil soars over a semitruck in Montana.

That’s Gregg Godfrey, who wrote on Instagram he only meant to jump 140 feet but ended up soaring for 160, setting a new record.

Godfrey actually set a Guinness World Record for the longest ramp jump back in 2008. That record was 50 feet 6 inches.

But Godfrey wasn't the only one setting a new record at the Evel Knievel Days stunt festival.

The Montana Standard reported Godfrey’s nephew jumped 202 feet over a utility terrain vehicle, while Levi Troutman, aka The KaMaKaZie Kid, ran through 10 walls that were on fire.

And we’ve saved the best — or at least the funniest — for last.

Check out the world’s largest balloon animal. This giant wiener dog, created in Utah, measures 65 feet by 32 feet and has 8,867 pink balloons.

As for what’s next for Jeremy Telford, the man who created the massive balloon animal?

He told the Daily Herald he and several other artists will build the Seven Wonders of the World out of balloons.