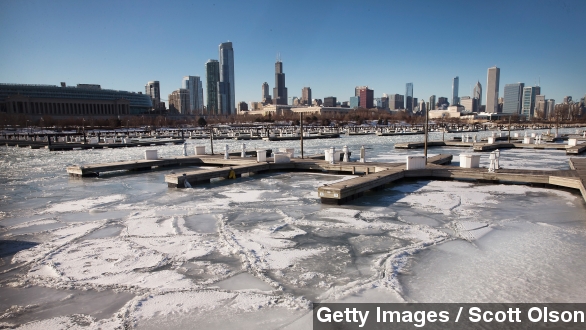 SMS
Top 3 Weather Records Set This Winter
By Katherine Biek
By Katherine Biek
March 21, 2015
As warmer weather approaches, we look back at three weather records that were made this past winter.
SHOW TRANSCRIPT

It's finally spring! Sunshine, rain and allergy season are upon us. And we thought there was no better way to celebrate than to look back on some of the weather records that were broken this past winter.

First up, we've got to talk about Boston. Poor Boston.

As of March 15, more than 108 inches of snow had fallen in the Boston area, making it the snowiest winter the city's seen since 1872, the first year official records were kept. (Video via MSNBC)

In February of this year alone, USA Today reports nearly 65 inches of snow fell on Boston.

Of course, the snow didn't come cheap. WBZ-TV says the city's mayor estimates it'll cost about $50 million for trucks to remove all the snow. The city had only budgeted for $18 million.

But despite all that snow, this past winter was actually Earth's warmest on record.

Last month also ranked as the second-warmest February on record. In the continental U.S., this past winter was the 19th-warmest we've experienced.

Back in January, NASA and NOAA announced the year 2014 was actually the hottest since records began in 1880.

And finally, maybe one of the most bizarre records set this winter happened in Italy.

Back on March 5, almost 101 inches of snow reportedly fell on the town of Capracotta, Italy, in just 18 hours. (Video via Telemolise)

Now, we don't know yet if this is a world record because tracking snowfalls isn't really easy.