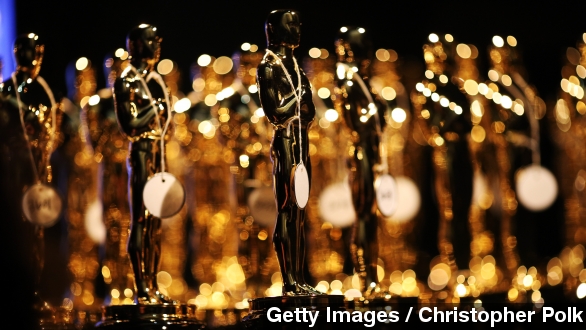 SMS
Top 3 Ways To Make The Oscars More Fun
By Katherine Biek
By Katherine Biek
February 21, 2015
Taking elements from a beauty pageant and incorporating them into Sunday's Oscars show would liven up an otherwise boring awards show season.
SHOW TRANSCRIPT

So awards shows this season have been kind of … eh.

All the performances at the Grammys were nice if you liked slow tempo music.

And the Oscars are basically considered the stuffiest of all the award shows. So... we're going to throw something out there. It's going to sound wild. But we think the best way for the Oscars to have more fun is to be more like... a beauty pageant!

The Oscars are already halfway there. Everyone already comes dressed up in their finest looks.

So what this show really needs is a swimsuit portion.

Think about it: Just like the Miss Universe contestants, all the nominees could parade on stage when its time for their category to be announced. And we're talking guys and gals here.

The nominees — at least the ones in the acting categories — all have pretty enviable physiques that we can't help commenting on when they hit the beach. So this shouldn't be too much of a stretch for them.

Next: add interview portions! Some of the best parts of televised pageants are the bizarre answers contestants come up with on stage.

This could especially liven things up when acceptance speeches get boring. I mean, you've got the occasional J. Law gold...

"You guys are just standing up cause you feel bad that I fell and that's really embarrassing," she said when accepting her Oscar for Best Actress in 2013. (Video via Academy of Motion Picture Arts and Sciences)

But for the most part, it's just people thanking people we don't know.

"We have so many people to thank ... Tom MacDougal, Chris Montan, Aremis, Besterman, the Anderson and the Lopez clan."

And finally, you may have heard legendary stories about Oscars SWAG bags. Both nominees and winners get them.

Business Insider reports this year's gifts for the winners are worth $168,000.

So it's really only fair that before commercial breaks the Academy parades out some of those said prizes so the audience can ooh and aah. Just like the Miss USA and Miss Universe pageants used to do back in the day.

CNN reports some of those prizes include a "glamping" trip worth more than $12,000, a $14,500 train trip to the Canadian Rockies, and a $28,000 custom-designed piece of furniture. Oh, and sex toys. Yep, even "Fifty Shades of Grey" took over the Oscars in a way.

The losers receive gift bags worth $125,000. Variety says those include a $20,000 certificate for the stars to discuss their horoscopes and analyze their dreams with a psychic.