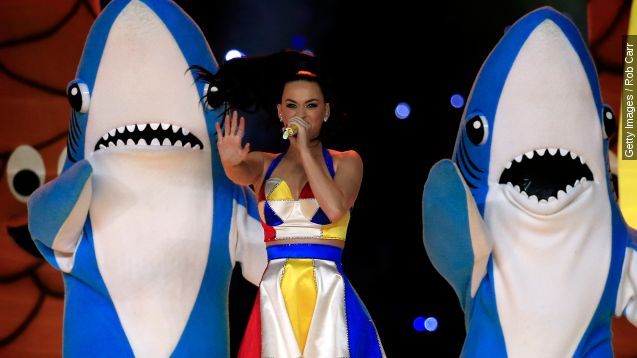 "We were showing llamas to our residents. ... We've been out here for about an hour trying to capture them. We're wondering if we could get some help," a 911 caller said.

2015 had a little bit of everything for everyone. For instance, we couldn't stop watching these llamas run amok in Arizona.

NBA fans and everyone else couldn't get enough of Steph Curry's daughter Riley stealing the show.

And we couldn't stop paying attention to the Kardashians. That's why they won the Internet in 2015.

But it's almost 2016 now, and we're going to have to put all of those great moments to rest. 2015 had some amazing viral gems — many of which are total guilty pleasures. The Internet's got some wild stuff, doesn't it?

On Feb. 1, left shark stole the Super Bowl halftime show from Katy Perry when he was a little slow on all the moves. A little slow or just didn't know the moves at all.

The inept shark inspired tons of memes and even Halloween costumes.

Left shark, also known as Bryan Gaw, eventually fessed up on Instagram, posting: "Yep. The rumors are true. Yours truly."

Supposedly, Gaw and a few other dancers were hired just days before the big performance, so there wasn't a ton of time to prepare.

Next is "the dress."

Yes, just days after our keen eyes spotted a slow shark, no one could determine what color the dress was — white and gold or black and blue?

I still see white and gold.

The dress debate originated on Tumblr earlier in the year, and no one could agree on its color.

It turned out to be black and blue.

But it's also being made in white and gold now. All that for nothing.

And finally, Drake and his dancing.

Drake had himself one heck of a 2015. From his chart-topping album "If You're Reading This It's Too Late" to his beef with Meek Mill, there were a lot of good moments.

But none better than his bad dancing in the "Hotline Bling" music video.

Yes, it inspired dads all across the world to think to themselves, "Hey, maybe I can dance after all."

"Saturday Night Live" and Donald Trump also got in on the fun.