Top 3 Unexpected Things People Are Camping Out For 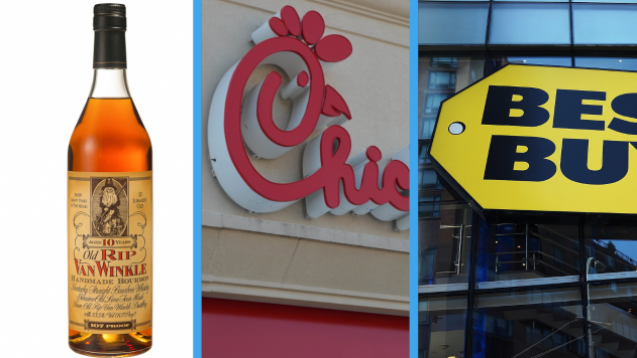 SMS
Top 3 Unexpected Things People Are Camping Out For
By Katherine Biek
By Katherine Biek
November 14, 2015
Residents across the U.S. are camping out for lots of less-than-conventional things this week, including fast food, Black Friday deals and bourbon.
SHOW TRANSCRIPT

As we get closer and closer to the end of the year, it's getting colder and colder. But that didn't stop a few groups of people from camping out for some less-than-conventional reasons.

And it turns out, the fast-food company has a pretty sweet promotion for the first 100 customers who walk through the door of any new location.

Its called the First 100, and those lucky customers receive one free combo meal for every week of the year. But the catch is that anyone who wants to participate needs to be standing in line outside the Chick-fil-A 24 hours before it officially opens. (Video via Chick-fil-A)

A reporter for WUSA said more than 100 people were waiting in line at the D.C. location.

"Is it worth it?" the reporter asked.

"Yeah. For the chicken? Yeah," said one man who was standing in line.

Next, one man in Florida is already camping outside his local Best Buy.

His name is Kevin Sutton and he's a local radio host, who is sleeping outside of the store for 33 days prior to Black Friday to raise awareness for homeless youth in the area.

ABC reports Sutton did this last year too — he slept out for 15 days and collected 3 tons of canned goods for a local charity.

Sutton told WKMG that besides raising awareness, he's also hoping to pick up a new TV on Black Friday.

And finally, some residents in Kentucky camped out to get their hands on some bourbon.

Newsy's partners at WCPO reported that at least one person waited 32 hours in line for the opportunity to get a bottle of Pappy Van Winkle bourbon at Party Source in Bellevue.

Turns out this type of bourbon is made only in limited quantities by the Buffalo Trace Distillery, so when bottles hit stores shelves, people camp out.

Earlier this year, the distillery announced it was producing less of the bourbon than expected, saying in a statement, "Frankly, about half as much as last year."

"The store sold out in just 42 minutes. ... And now the bourbon may become even more highly prized. Retailers say it's now only going to be released once a year," the WCPO reporter said.