Top 3 Things We Want To See At The Grammys 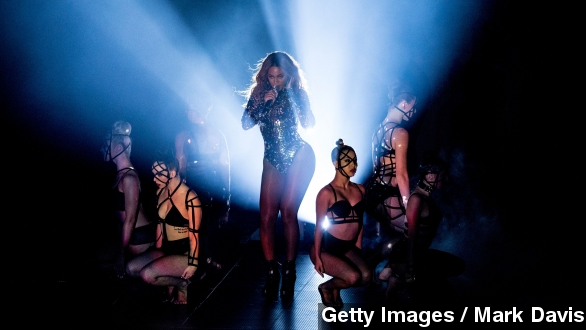 SMS
Top 3 Things We Want To See At The Grammys
By Katherine Biek
By Katherine Biek
February 7, 2015
We count down some of major performances, and possible announcements, we want to see at this year's Grammy Awards.
SHOW TRANSCRIPT

It’s known as music’s biggest night. The Grammys are almost here and we’re already making our lists of what we want to see happen. Like what about some really outrageous fashion? Or someone forgetting their lyrics mid-performance? Oh, yeah...we want our jaws to drop come Sunday night.

First — Beyonce is performing and it should be a showstopper.

Beyonce has a habit of being the hands-down most-talked about performer at every awards show she attends.

Like back in 2011, when she announced she was pregnant at the MTV Video Music Awards.

Or how about when her daughter Blue Ivy stole the show at the end of the same awards show three years later?

Next — the Grammy producers are having Kanye West perform not once but twice.

He’ll share the stage with Paul McCartney and Rihanna for  “FourFiveSeconds.”

And then West and the former Beatles singer will return to sing “Only One” — the song West wrote from the perspective of his late mother talking to his daughter, North.

That’s a lot of mic time for Kanye and we know what he can do with just a little bit of attention.

Remember when Kanye flashed a sign saying “I told you so!” to photographers after he won three Grammys back in 2006?

And who can forget the 2009 VMAs when he jumped on stage after Taylor Swift won the Best Female Video award to announce to the audience that Beyonce should have won instead.

And finally — we really, really want Katy Perry’s Grammys performance to be an encore of her performance at Super Bowl XLIX (49).

Now, according to a press release Katy’s set to sing “By the Grace of God.” It’s a bit slower in tempo than her other hits like “Roar” or “Firework” — so don’t expect any megazords or dancing palm trees.

The sea creature was even interviewed on “The Late Late Show.” Well, sort of.

“Did you expect this to become the phenomenon that it has?”

So, Left Shark has performed at the Super Bowl and been on a late-night talk show. What’s the next best thing? The Grammys, of course.

This video includes images from Getty Images and music from Podington Bear / CC BY 3.0.