Top 3 Things We're Secretly Worried Might Happen At The VMAs 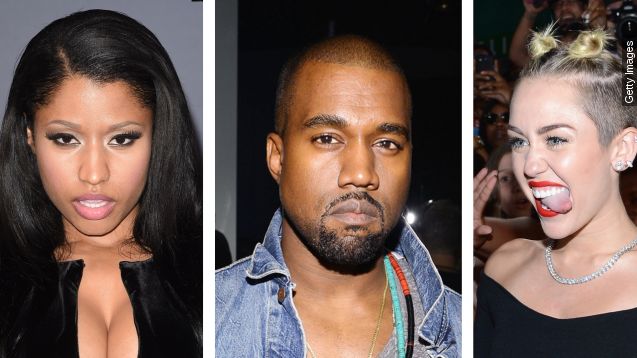 The MTV Video Music Awards are finally here. Now with award shows, we usually talk about all the things we want to see happen during it — like this person winning this award or that person tripping on the red carpet. So instead, we decided to put together a list of things that would be totally cringeworthy if they did happen Sunday night.

First up, what if Nicki Minaj and Taylor Swift totally had a girl fight during the telecast? Or at the very least, if some seriously awkward tension happened between the two.

Swift is certain to be there since she's up for nine awards — the most of any nominee. (Video via Big Machine Records / Taylor Swift)

And Minaj, while also nominated three times, is performing at the very top of the show. (Video via Republic Records / Nicki Minaj)

The two got into an infamous Twitter feud back in July after Minaj questioned why her and Beyonce's "Feeling Myself" music video wasn't nominated. Minaj concluded, "If your video celebrates women with very slim bodies, you will be nominated for vid of the year."

Swift shot back, "I've done nothing but love & support you. It's unlike you to pit women against each other. Maybe one of the men took your slot."

The two seemed to sort of make up later after Swift apologized saying she thought Minaj was calling her out. But still — there could be some lingering tension.

Next, Kanye West is going to be in attendance.

And let's be honest, if he's going to be at an event, we should probably all be on alert.

There was the crashing of Swift's acceptance speech for best female video during the same awards show back in 2009.

Then he did the same thing to Beck during this year's Grammys.

And if you can remember all the way back to 2007, when West didn't win any of the VMA awards he was nominated for, he had a complete meltdown. And Entertainment Tonight just happened to catch it on video.

This year, West is being honored with the Video Vanguard Award, which is MTV's version of a lifetime achievement award. (Video via Roc-A-Fella Records / Kanye West)

And finally, Miley Cyrus is hosting and she's apparently been given "free reign" by network executives, according to Entertainment Weekly.

Is she going to fly in on a wrecking ball? (Video via RCA Records / Miley Cyrus)

Or what if she just twerks the whole show? It's a two-hour show. That'd be a lot of twerking.

Or she continues wearing her colorful clothing choices, like the ensemble she wore on "Jimmy Kimmel Live" this past week. There are only so many heart-shaped pasties we can take.