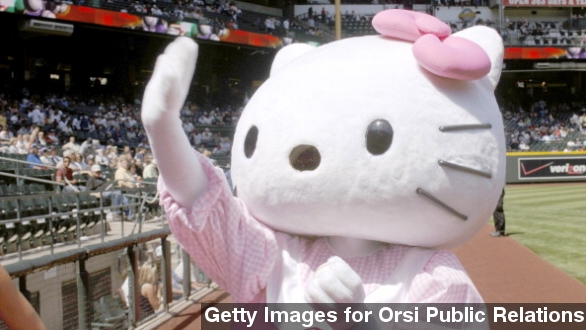 SMS
Top 3 Strange Animal Stories Of The Week
By Katherine Biek
By Katherine Biek
August 29, 2014
Our favorite animal stories of the week highlight a blue lobster, a panda that might've faked a pregnancy and Hello Kitty, who isn't a cat after all.
SHOW TRANSCRIPT

​This week there were quite a few animal stories in the news. And a lot of them were flat-out bizarre — like a panda faking a pregnancy and a famous kitty that apparently isn't even a feline. Here are your top three strange animal stories of the week.

First up, we've got a lobster — a blue one that was caught by a fisherman in Maine and his 14-year-old daughter.

The duo runs Miss Meghan's Lobster Catch company. And when father and daughter caught this rare species, they knew they couldn't just sell it.

When asked about her find, Meghan told AccuWeather she'd "never seen one before."

There's a reason for that.

According to National Geographic, the chances of coming across a blue lobster are about 1 in 2 million. The lobster's blue coloring comes from a genetic defect that causes a specific protein level to be elevated.

Meghan ended up naming her crustacean friend Skyler. She and her father donated the lobster to the Maine State Aquarium, where it is now on display.

​Next up, a panda in China appeared to be expecting, but Ai Hin — she's on the right in this video — wasn't pregnant after all. This after the center she lives in planned a whole broadcast around her cub's birth.

According to Xinhua, researchers at the Chengdu Giant Panda Research Center said Ai Hin was showing signs of pregnancy for about two months — she wasn't moving around as much and had increased hormone levels.

But then those symptoms went away, leading the researchers to conclude she'd had a phantom pregnancy. ABC explains her possible motivation.

"They believe Ai Hin might have been faking it to improve her quality of life. Turns out pregnant pandas at the Chengdu Base are pampered with single dens complete with air conditioning."

What's even more incredible about this story is that CNN reports pseudopregnancies among pandas aren't rare, saying, "Giant pandas are notoriously reluctant to breed in captivity."

In fact, Xinhua reports only 24 percent of female pandas in captivity give birth.

And finally, we all thought she was a cat, but it seems we might've been wrong. (Video via Enoki Films / "Hello Kitty's Paradise")

An anthropologist who has been studying the character for years told the Los Angeles Times: "Hello Kitty is not a cat. She's a cartoon character. She is a little girl. … She's never depicted on all fours."

So apparently, she's a girl who looks like a cat. Because she definitely has cat ears. And whiskers.

Hello Kitty has quite a backstory. She lives in London and was born in November. She even has a twin sister named Mimmy.

This new revelation made us ask some serious questions.

Like, is Goofy even a dog? If so, how does Disney explain Pluto?

And is Woody Woodpecker actually a woodpecker? Or is he just a boy with a big nose who likes to hit things?

We don't even know what to think anymore.