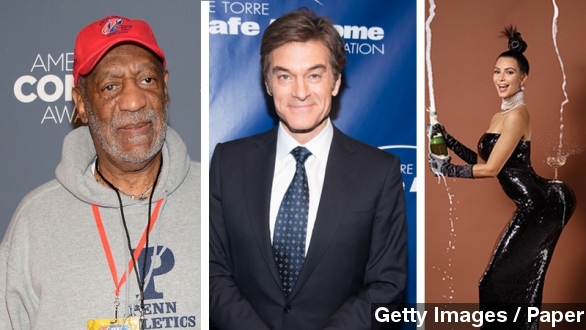 This past week we’ve definitely seen our share of social media blunders. And they all happened to some pretty famous faces. Here's what this week had in store.

First up, we’ve got Bill Cosby, probably best known by many as the star of “The Cosby Show,” which aired from the mid ‘80s to the early ‘90s.

On Monday, Cosby tweeted a photo of himself with the caption, “Go ahead. Meme me!”

Not a good idea. Cosby’s plan completely backfired, and he ended up taking the tweet down. A New York Post reporter did manage to grab a shot of it beforehand.

The 77-year-old comedian had set up a Cosby Meme Generator on his website and wanted people to try it out.

And people flocked to it, only the majority of them created memes referencing Cosby’s rape allegations.

In early 2005, a woman named Andrea Constand came forward claiming Cosby “drugged and sexually molested” her years before. Vulture later reported that a total of 13 women alleged Cosby had raped them.

Cosby and Constand settled out of court and none of the other women ever testified against the comedian.

We’re thinking Cosby won’t be asking his Twitter followers to create any memes of him in the future.

On Tuesday, he tweeted out to his followers, telling them to ask their biggest questions.

And, boy, did he get some questions. But instead of being about medical issues, most were centered around the “miracle-weight loss cures” Dr. Oz has promoted on his shows and which subsequently landed him in front of a Senate committee hearing.

Andrew asked, “I just read that my new detox regimen might be toxic. Can you recommand a detoxification to detoxify my toxins?”

And a fellow doctor wanted to know how she could get her patients to stop believing everything Oz says on his show.

Ouch, probably not the way Dr. Oz was hoping that Q&A session was going to go.

And finally, we’ve got a story that isn’t a social media fail per se, but how could we possibly get away with stories about social media this week without talking about Kim Kardashian's new "talent?"

Balancing a champagne glass on her, umm, assets.

Kardashian told Paper Mag — which did the shoot— she thinks social media has really heightened her popularity. “I don’t think social media was that heavy when we started our show, but I think we really evolved with social media.”

And though Kardashian and the publication set out to break the Internet, we’re not really sure they succeeded.

Which is a steep decrease from the 2.41 million who liked the photo of her and husband Kanye West kissing at their wedding back in May.

And then there’s the fact that so many people decided to make her the butt of jokes. Pun intended.

Like this man, who said he decided to take it a step further by turning the reality star into a centaur.

And even the Met Museum decided to join in on the fun, posting a photo of a piece of art resembling Kardashian’s pic and tweeting “we have artworks that can #BreakTheInternet too!”

So, Christian, that's what you've gotta do to get 800,000 likes on Instagram. All I need is the...champagne glass, well and something to balance it on.