Top 3 Ridiculous Things You Can Spend Money On 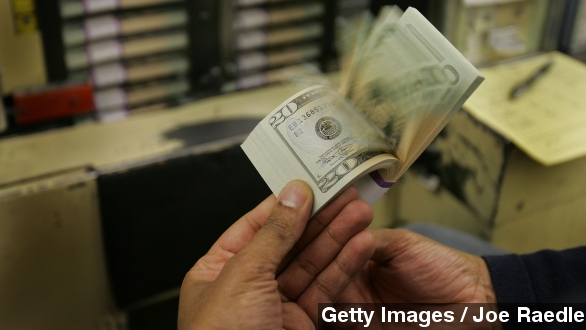 Got some extra dough you're just itching to spend? Well, you could send it our way, or you could always purchase one of these three outrageous items up for grabs.

We'll start with the least expensive: the newest Apple Watches.

You can spend anywhere between $350 to $17,000 depending on which watch you're interested in. (Video via Apple)

It even has a super fancy name — the Apple Watch Edition — and is made of 18-karat rose gold. Because it's available in two different sizes, the pricing for the watch runs between $10,000 to $17,000.

Next, you can purchase air. Seriously. Air.

But this isn't just any air. It's air from Kanye West concerts.

But West's missus, Kim Kardashian, discovered there was one bag of air selling for more than $60,000. On Twitter she wrote, "WOW he can sell anything!"

Music site Consequence of Sound did point out that eBay post was taken down, so it's not clear whether someone actually paid the $60,000 offered price.

And finally, perhaps the most ridiculous thing you can purchase: insurance for your legs.

At least that's what Taylor Swift reportedly did this week. For $40 million, to be exact.

This was done in preparation for her upcoming tour. A writer for MTV reported, "It totally makes sense that she'd want to protect herself against possibly injury — her whole career could potentially be at stake."

While it probably seems ridiculous to us, this is pretty run-of-the-mill in Hollywood.

But no one can take the top spot for Mariah Carey, whose legs are supposedly insured for — get this — $1 billion.