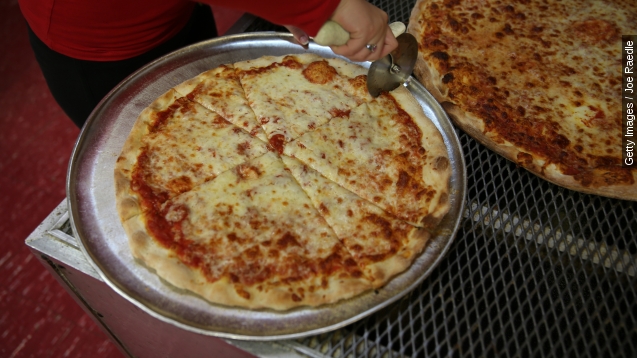 Pizza. It's basically its own food group. Which is maybe one of the reasons why there was so much news about pizza this week.

First, eat as many slices as you want. Just remember to get off the grease first, according to a new study from LabDoor Magazine.

It found that dabbing the grease off a pizza slice each time you eat can save you 40.5 calories per slice or 6,655.5 calories each year. That number equals about 20 slices of pizza. These numbers are based off the fact LabDoor Magazine found "the average American eats 23 pounds of pizza each year."

The sad thing is: Those more than 6,000 calories only equal about 2 pounds.

Full disclosure: LabDoor based its study calculations off a slice of Domino's pepperoni pizza.

Now, that we've learned we need to consume way more pizza each year to get up to that 23-pound statistic, here's a new pizza concoction that might strike your fancy.

As part of its Undefeated Sunday Football menu, Slate in New York City is offering what it calls the "Four Play Mac & Cheese Pizza."

This pizza features Bechamel sauce, pasta, a signature cheese blend and it's topped with Cheetos.

The pizza's creator told Time: "Cheetos is a great accompaniment to any dish. I've encrusted a steak with them, made a broccoli soup with Cheetos as a garnish, or you can ground them up with olive oil to make bread crumbs."

And finally, now that we've discovered a new calorie-filled pizza to try, we've got to have a way to carry it. Because apparently holding a slice of pizza in your hands is just way too difficult.

Introducing the Portable Pizza Pouch. It's sold on a website called Stupidiotic for $8.

It also allows wearers to carry around a second slice of their favorite pizza, while they're eating the first.