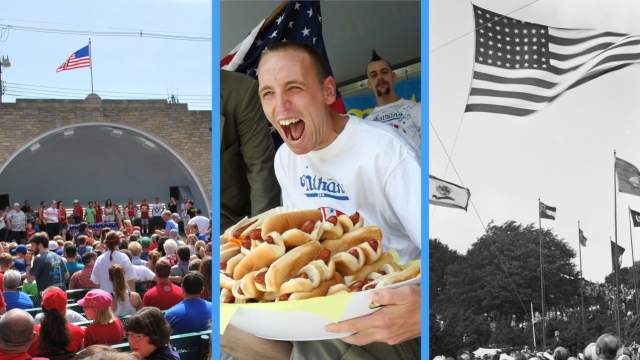 Many cities have some sort of Fourth of July celebration. They'll have a fireworks display, perhaps a parade, maybe a concert or festival. But there are three locations that really take the cake when it comes to celebrating our nation's independence.

First up is Seward, Nebraska. It's known as "America's Fourth of July City."

It's a small town about 20 minutes outside the state capitol with a population of about 6,000.

Seward has been celebrating Independence Day for almost 150 years, and in 1979, Congress passed a resolution to call the town "America's Official Fourth of July City — Small Town USA."

The Lincoln Journal Star reports local high school students do the majority of planning for the town's big July Fourth celebration. They even start planning almost a year in advance for the three-day event.

More than 40,000 people on average celebrate in Seward each year. This year's celebration includes a pet parade, airplane show and bicycle ride.

Next is Coney Island in Brooklyn, New York.

It's home to the annual Nathan's Hot Dog Eating Contest.

And this year just happens to be the 100th anniversary of the competitive eating event.

Men and women compete to see who can eat the most hot dogs — and keep them down — in 10 minutes. In 2013, Joey Chestnut managed to eat 69 hotdogs, setting the world record.

Those celebrating in Brooklyn can also see the 40th annual Macy's Fourth of July fireworks display. This year's show is 25 minutes long and will include 50,000 effects.

The final location is Rebild, Denmark. Yes, the European country.

Back in 1912, a group of Danish-Americans purchased over 100 acres of land.

The Los Angeles Times reports they then donated the land to Denmark's government with one stipulation: It had to celebrate America's Fourth of July every year as a way to honor the country that had taken in so many Danish immigrants.

Today, the area is a national park and is home to the largest July Fourth celebration outside the U.S.

This video includes clips from Nathan's Famous and Eduardo Ortiz / CC BY 3.0 and images from lsommerer / CC BY SA 2.0, Dick Clark / CC BY 2.0, Getty Images, Mark Jensen / CC BY SA 2.0 and The Royal Library, Denmark.