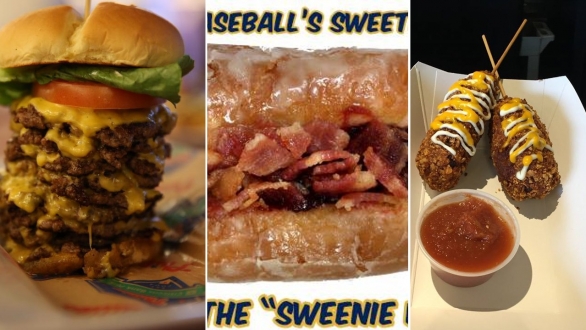 SMS
Top 3 Outrageous Ball Park Food Offerings This Season
By Katherine Biek
By Katherine Biek
April 4, 2015
Regular season games for baseball have officially begun, so here's a look at some of the most outrageous food items you can get at games this year.
SHOW TRANSCRIPT

Baseball season is upon us. Teams across the country are getting ready for their regular season games beginning this weekend and we thought the best way to celebrate America's favorite pastime was to take a look at some of the most outrageous ballpark treats you can purchase this year.

First up, the Wilmington Blue Rocks, a minor-league team out of Delaware, is offering what it calls the Sweenie Donut Dog.

The Huffington Post reports the team partnered with Krispy Kreme doughnuts to create a hot dog smothered in raspberry jam and bacon bits. And instead of a traditional hot dog bun, the bread is made out of glazed doughnuts.

Now the "Sweenie Donut Dog" name was chosen by the Blue Rocks' fans. The Washington Post reported back in March that some other options up for consideration were the "Ground-rule Double Bypass Donut Dog" and the "Heart Attack Dog."

Next up, the Milwaukee Brewers have stepped things up a notch with their Inside the Park Nachos, which is essentially deep fried nachos on a stick.

ESPN reports this one-handed item consists of taco meat and refried beans, rolled in crushed Dorito chips and then deep fried. Cheese and sour cream are drizzled on top as an added garnish.

And finally, maybe the most outrageous is a burger being offered at the Philadelphia Phillies home games this year.

This monster burger won't be easy on your waistline either. Bleacher Report says it contains 2,200 calories and 139 grams of fat.