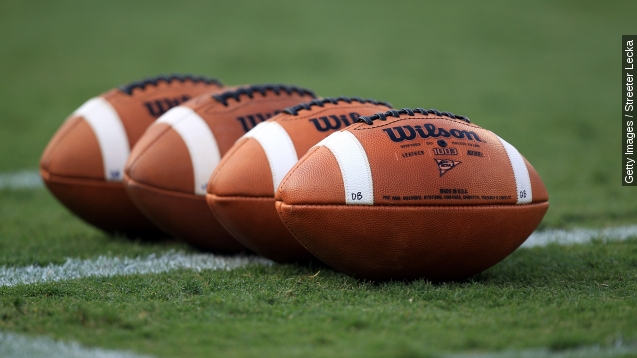 SMS
Top 3 Non-Football Football Stories Of The Week
By Katherine Biek
By Katherine Biek
September 12, 2015
In honor of the start of the regular season for the NFL, we're talking all of the off-the-field football stories that made headlines this week.
SHOW TRANSCRIPT

Regular season games for the NFL have officially started. In honor of this momentous occasion, we thought it best to celebrate by looking back at all the stories this week that centered around the sport, but didn't have anything to do with the players themselves.

First up, the University of Hawaii football team is bringing back a bit of color to its uniform.

When the Rainbow Warriors take on the Ohio State Buckeyes Saturday, the team will be wearing a "new road retro uniform." The retro part is the rainbow logo, which is from the 1980s.

Mashable reports the football team replaced the rainbow design for a much more generic looking uniform before the 2000 season started.

Next, we suffered through story after story centered around Deflategate for almost nine months.

And just when we thought it was all over and we'd have a quieter start to the NFL season — Headsetgate became a thing. No joke.

The term was coined after Thursday night's game between the New England Patriots and the Pittsburgh Steelers.

The coaches for the Steelers said the radio broadcast for the opposing team was playing in their headsets — so distracting, the coaches allegedly couldn't even communicate with each other.

While the NFL said it's going to review the complaints about the headsets made by the Steelers, other teams have pointed the finger at the Patriots whenever similar communication issues have occurred at Gillette Stadium.

And finally, no video about football-related events would be complete without mentioning that one college marching band making headlines.

During its space-themed halftime show last week, the Kansas State University marching band formed what was supposed to be the starship enterprise from "Star Trek" attacking the Jayhawk, which is the mascot for the school's rival, the University of Kansas.

Though the band's director did apologize, the school suspended him for a week and said it would pay a $5,000 fine to the Big 12 Conference for unsportsmanlike behavior.