Top 3 Most 'Important' Things We Learned This Week 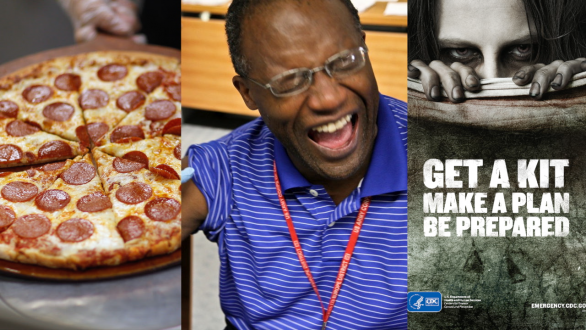 SMS
Top 3 Most 'Important' Things We Learned This Week
By Katherine Biek
By Katherine Biek
February 27, 2015
The top 3 most important things learned this week include addictive foods, which sex handles illness better and how to survive a zombie attack.
SHOW TRANSCRIPT

When you think of a study, you probably often think of some scientific or health-related finding, right? Well, while we definitely had our fair share of those this week, there were also some studies released that provided information that wasn't exactly what you would call "life-altering." But hey! They're still important ... at least to us.

First, we learned what type of food Americans are most addicted to. Yep, you guessed it: pizza.

Researchers at the University of Michigan discovered that a lot of us here in the U.S. really, really like processed food.

Here's how the researchers came to that conclusion: they started with more than 100 undergrads, showed them pictures of foods — two at a time — and asked them to identify which food they had the most trouble saying 'no' to. To absolutely no one's surprise, those undergrads pointed to processed foods most of the time — with pizza coming out on top.

Also not surprising: french fries and chocolate were close runners-up behind pizza.

"Carrots, cucumbers and apples. Shocking. ... Our George Stephanopoulos would disagree. I would have to say you're addicted to apples," ABC's Amy Robach said.

Next up — we learned something us women knew all along. That we totally handle being sick better than men do.

Now the study didn't throw men completely under the bus. It found that when coping with just one symptom — like a runny nose — men are actually better at being sick than women. It's when you add on multiple symptoms that's the problem.

Researchers at Washington State University did find that a woman's personality affects how she copes with being ill, though. Women who are highly agreeable and have strong relationships or ones who "have little need for achievement" deal with being sick the best.

And finally, the most important finding of the entire week: The most effective way to survive a zombie apocalypse. (Video via AMC / "The Walking Dead")

Researchers at Cornell University believe big cities, like New York City and Boston, would be the first to be devastated by an attack.

Therefore it would be best for the entire population to head west as quickly as they can toward the Rocky Mountains.

Syracuse.com reports the graduate students, who were inspired by "World War Z", split up the U.S. population into four groups, classifying people as either humans, infected humans, zombies or dead zombies. They then, "studied outcomes of possible scenarios, such as awareness of the outbreak and whether people can outrun zombies seeking brains to snack on."

The students really got into it, writing, "Given the dynamics of the disease, once the zombies invade more sparsely populated areas, the whole outbreak slows down — there are fewer humans to bite, so you start creating zombies at a slower rate."

But if a zombie apocalypse should ever happen, never fear because the CDC is ready.

On its website, it outlines a zombie apocalypse preparedness guide, which includes information about all the emergency supplies you would need if you were forced to evacuate to a zombie-free refugee camp.

New York Daily News reminds us not to get our hopes up though, saying the Cornell researchers "write in the paper's abstract that even with a few safe seclusion spots, 'We are largely doomed' if zombies attack."