Top 3 Most Extreme Water Slides To Help Beat The Heat 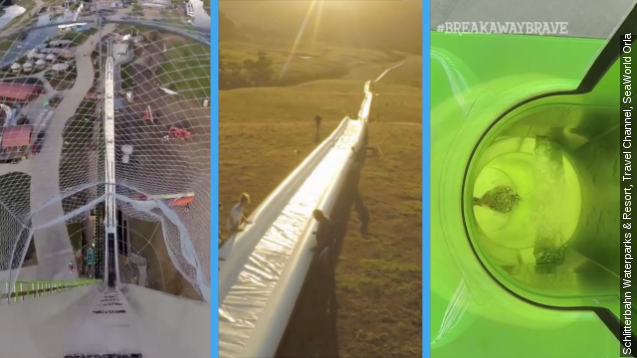 SMS
Top 3 Most Extreme Water Slides To Help Beat The Heat
By Katherine Biek
By Katherine Biek
July 11, 2015
We take a look at some of the most extreme water slides in the U.S. in this week's top 3 video.
SHOW TRANSCRIPT

The one thing you can count on each summer is the heat and trying to find new ways to beat it. So what about traveling to some of the most extreme water slides? Sound fun? We sure think so.

First up, Vernon, New Jersey, is now the home to the world's longest water slide.

The almost-2,000 foot slide was recently inflated at Action Park, located in the Mountain Creek ski resort. The slide was previously located in New Zealand

"That is six football fields in length. They use 1,000 gallons of water for this every hour, which is 16,000 cups of water. By my calculations that's about 47 million bathroom breaks," NBC's Jenna Wolfe reported.

This slide — which Guinness World Records verified is the longest — was even featured on the Travel Channel's "Xtreme Waterparks" earlier this month.

If nearly 2,000 feet of water slide isn't really your cup of tea, how about the world's tallest instead?

Known as Verruckt, the slide, which is located in Kansas City, Kansas, is 168 feet and 7 inches tall. (Video via Schlitterbahn Studios Design Group)

That means it's just slightly under 17 stories tall.

Which makes it taller than Niagara Falls, which is estimated to be about 165 feet tall at the longest vertical drop, and the Statue of Liberty, which is 151 feet tall from the base to her torch. (Video via Expedia)

And finally, the water slide with one of the most intense drops we've ever seen can be found in Orlando, Florida.

Riders braving Ihu's Breakaway Falls actually step into what are called breakaway boxes and then fall into the slide. There are four paths, with one of them dropping riders more than three stories.  (Video via SeaWorld Orlando & Aquatica)

This video contains an image from Getty Images and music from Kevin MacLeod / CC BY 3.0.

Trump Says He Took The Fifth Amendment In NY Investigation