Top 3 Groups Trying To Convince Us That Aliens Exist 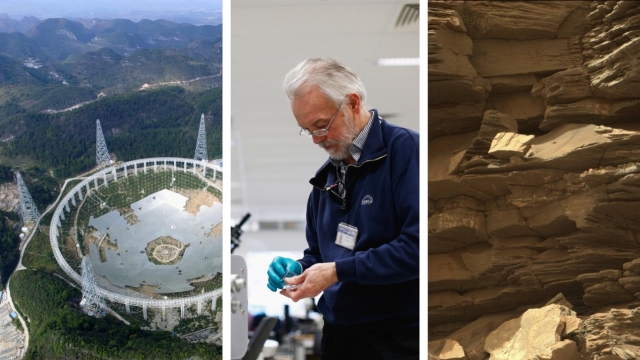 SMS
Top 3 Groups Trying To Convince Us That Aliens Exist

By Katherine Biek
September 24, 2016
UFO hunters aren't the only ones on the lookout.
SHOW TRANSCRIPT

There's been a lot of space news recently, and with any space news, there's always talk of aliens. But this week may have had a bit more talk than usual as three groups seemed to really want to prove aliens exist.

First is China. It installed a massive telescope earlier this year but announced it will be powering the thing up Sunday.

But this isn't any old telescope used for locating those hard-to-find constellations. China specifically built it to detect radio emissions in space, which would prove that intelligent life is out there somewhere.

The next group is the European Space Agency. It's planning to build what it calls a European Sample Curation Facility — which is a super fancy way of saying alien life-form containment center.

The ESA and Russia's space agency have teamed up to search for any sign of life on Mars over the next 10 years.

While researchers believe it'll be awhile before any samples of life could be brought back to Earth from the red planet, they want to be prepared with some place to store it.

And while NASA made it clear it didn't find aliens on Jupiter's moon Europa, some eagle-eyed alien hunters believe they've found a snake in a NASA photo of Mars.