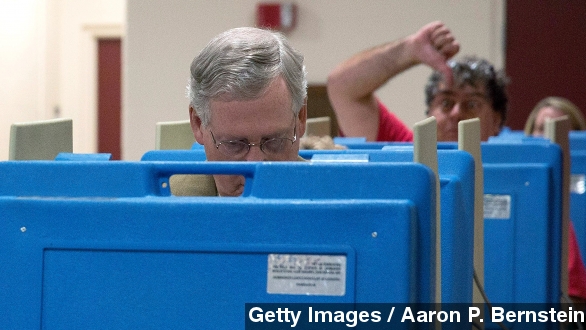 With the midterm elections largely said and done, now we can focus on the good, the bad and the ugly. OK, actually, we covered that Tuesday. How about we just focus on the funny?

At No. 1, Missouri Gov. Jay Nixon might be the butt of some jokes after a photo from his Twitter handle showed him voting ... but also, ahem, showed off the person voting next to him.

The tweet has since been deleted. But not before outlets made a few bad puns.

ANCHOR VIA KMOV: "Missouri Gov. Jay Nixon on the left. There was somebody on the right, but she had to split. ... Apparently, this picture fell through the crack."

We'd go into our next pick with some kind of funny and probably inappropriate joke, but KMOV covered that crack for us.

At No. 2, here's Senate Minority Leader Mitch McConnell, who could become Senate Majority Leader, giving a thumbs up.

And here's a voter apparently gave him a big thumbs down. And everyone noticed.

AMY ROBACH VIA ABC: "But you know what? We now know McConnell had the last laugh. Not only did he win, he's now set to become Majority Leader, so thumbs up for Mitch McConnell."

KNBC: "Perhaps you can call it Thumbgate."

"It wasn't a resounding show of support here. ... Apparently that isn't the majority of voter opinion."

"Tell us how you really feel."

The thumb that launched a thousand political quips.

At No. 3, ever see those "silence your cellphone" signs? Pretty sure MSNBC has those and journalist Tom Brokaw missed the memo during live election coverage. And, funnily enough, his ringtone sounded like a siren.

BROKAW VIA MSNBC: "Could that be me?"

MADDOW: "I thought you were a fire."

The summary on MSNBC's YouTube page says it was a "breaking" grocery alert.

Although The Blaze called it an "embarrassing mishap," Brokaw played it off pretty smoothly, even pretending to answer the phone at one point.

This video includes images from Getty Images and music from Risey / CC BY 3.0.