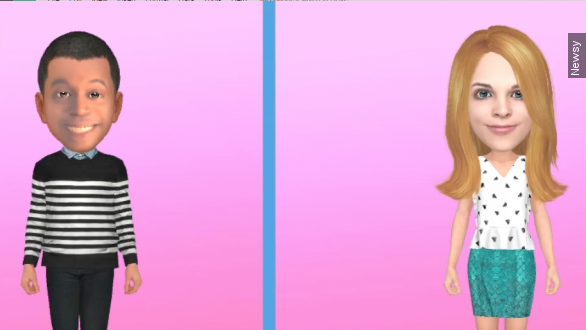 SMS
Top 3 Apps Of The Week Part II
By Katherine Biek
By Katherine Biek
May 2, 2015
In this edition of Top 3 Apps, we talk about the avatar-making app My Idol as well as a twist on a dating app and one to help get of mice.
SHOW TRANSCRIPT

New apps are released every day. And while a bunch are useful, others are just plain bizarre. Like these three:

First, we'd be remiss if we didn't talk about the app My Idol, which essentially turns the user into an avatar.

Despite being written completely in Chinese, the app is fairly easy to use. All you have to do is take a selfie, and then your avatar is created.

"Ever wanted to look like a panda? Or an extremely flamboyant singer? ... But why bother with realistic things when you can put a dog's face on a man's body?" a reporter for The Guardian says.

CBC reports My Idol "is the internet's latest, and perhaps creepiest, obsession."

And a writer for Tech Crunch writes the app "forces you to confront what everyone you know, including people you are related to, would look like as strippers." She's, of course, referring to the fact My Idol allows your avatar to pole dance.

Next, there's an app that allows you to catch any mice that are running around in your home. By renting a cat.

The cleaning service Handy partnered with an animal charity to allow app users to choose a cat to temporarily foster.

Of course, the two companies hope the cats end up being so talented at catching mice that their renters will want to keep them for the rest of their nine lives.

And finally, there really is a dating app for everything.

The one we're highlighting is called High There. As in h-i-g-h, like on marijuana. Yep.

Affectionally called the "Tinder for stoners," the app works the same way any other dating app works: All you have to do is create a profile and begin finding others who like smoking marijuana just as much as you.

FastCoExist spoke with the creator of High There, who said: "I hated dating on other sites and apps because as soon as the idea of my cannabis consumption came up — date over. ... Selfishly I hope this helps others like me."

This video contains images from Getty Images and music from Kevin MacLeod / CC BY NC 3.0.