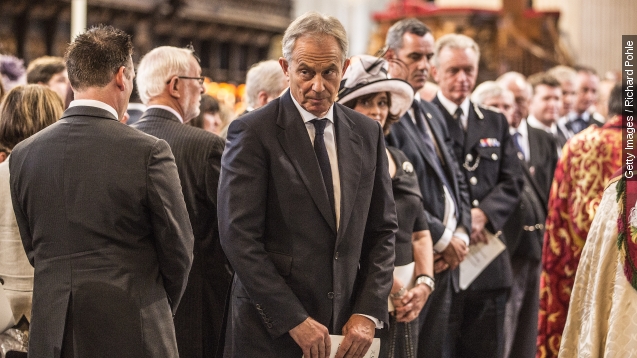 "I can also apologize by the way for some of the mistakes in planning and certainly our mistake in our understanding of what would happen once you removed the regime," Tony Blair told Fareed Zakaria on CNN.

That's as close as former British Prime Minister Tony Blair has come to apologizing for the Iraq War. But there's a caveat.

Blair added, "I find it hard to apologize for removing Saddam."

Blair's support for the American-led war in Iraq proved deeply unpopular in the U.K. and contributed to a steep decline in membership of Blair's Labour Party.

In fact, current Labour leader Jeremy Corbyn, who won the leadership in a landslide last month, helped organize one of the biggest anti-war protests in British history against the Iraq war. (Video via Channel 4, C-SPAN)

"Every country, every continent, everybody in the world has a chance today to say, 'No, absolutely no to war on Iraq,'" Corbyn said in 2003.

For his part, Blair has expressed regret about the war before, especially the deaths it caused.

"I regret deeply and profoundly the loss of life, whether from our own armed forces, those of other nations, the civilians who helped people in Iraq or the Iraqis themselves," Blair said in 2011.

Still, Blair's latest apology is his most outright. You can catch his full interview on "Fareed Zakaria GPS" on CNN.