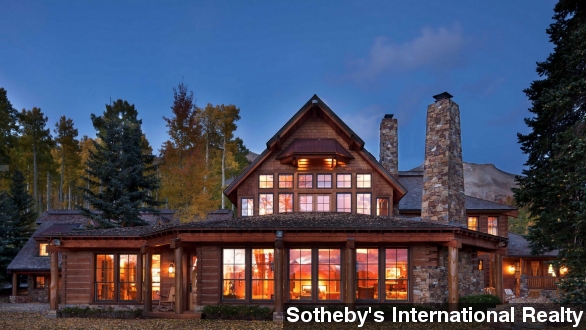 Tom Cruise's home in beautiful Telluride, Colorado, is for sale. The house, which is big on its own, also comes with 298 acres ... and its own helipad. (Video via Paramount Pictures / "Mission: Impossible II")

But as our partners at KMGH note, there's oh-so-much more:

"Apparently it has bleached cedar wood floors. Those alone are probably worth all of our houses put together. Tom Cruise helped design this home, apparently, in the 1990s," a KMGH anchor said.

"We should probably consider movies after looking at a house like this," another anchor said.

"Look at it this way: That's just the guest house," the reporter said.

Yeah, that little guest house. We're hoping for an invite.

To get to the home, you drive down a mile-long private road. The home, which also features a gym and a library, has been on the market since last year.

And Cruise has owned the property for more than 20 years. He finished designing the home back in 1994 — back when he was married to Nicole Kidman. Listing agent Bill Fandel told The Wall Street Journal Cruise is selling it because he doesn't use it very often.

Though the house did recently have a starring turn of its own: Flyover shots of it were featured in the new HBO documentary about Scientology "Going Clear." Because Cruise is, well, the Scientologist.