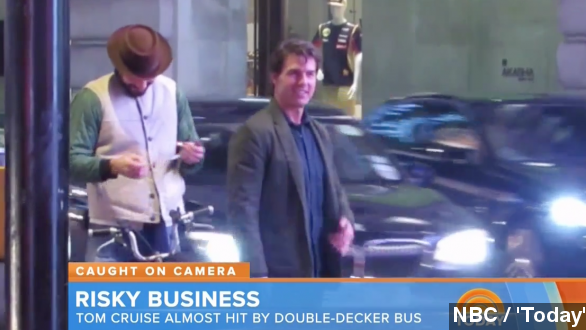 SMS
Tom Cruise Maybe, OK Not Really, Almost Hit By Bus
By Lauren Zima
By Lauren Zima
December 3, 2014
The actor was sort of close to being hit by a bus in London, but the best part is the media overreaction, puns included.
SHOW TRANSCRIPT

Or, you know. Tom Cruise looking both ways when crossing a street and having the time to make a sensible decision to get out of the way of a bus that was several feet away from him.

“He does all these high-flying movie stunts.”

“He’s famous for doing his own stunts.”

Did the actor forget his stunt training?

Or as this site pointed out, forget he’s not in America??

And — there have to be puns. Risky Business???

As The Hollywood Reporter put it: “Crosswalks prove a mission impossible for Cruise.”

What, nobody could make a “Vanilla Sky” joke?

Look, yes, in England, the traffic flow can confuse Americans.

In other headline news — Katie Holmes’ ex “mingled with a pedestrian” after the incident.

So … spoke to another human.

Next — they’ll go grab a “Cocktail” together.