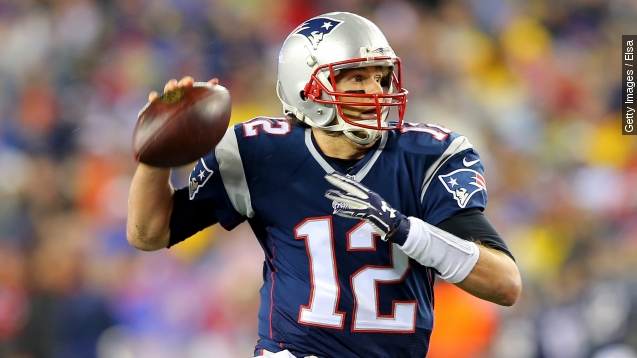 By Matt Moreno
May 14, 2015
Tom Brady is expected to appeal his four game suspension Thursday and the odds of him being successful look good.
SHOW TRANSCRIPT

Now that New England Patriots quarterback Tom Brady's had a few days to mull over his four game suspension for deflated footballs used in the AFC Championship game against the Colts, he seems set to fight the punishment.

Brady has until 5 p.m. EST Thursday to file an official appeal with the NFL. After that, Brady and his camp will likely argue the punishment is too harsh.

"I've always played within the rules and never done anything to break the rules," Brady said during a press conference in January.

And to help with that appeal, Brady has reportedly hired lawyer Jeffrey Kessler — a man who's largely described as the NFL's enemy.

Kessler is the same lawyer who's represented Ray Rice and Adrian Peterson, along with a handful of other high profile athletes. Both Rice and Peterson won their cases in district court. (Video via Winston & Strawn LLP)

That, coupled with the fact Brady is essentially the NFL's posterchild and he's never been in much trouble with the league, is leading many to believe Brady's chances of getting a reduced sentence is extremely likely.

Gary Meyers of the New York Daily News lists three reasons why Brady will likely get off, including:

- There is a history of appeals leading to a reduction in discipline.

- Kessler has an excellent track record against the NFL in these matters.

And ESPN's Adam Schefter says a league source of his agrees.

But this of course isn't a sure thing for Brady. He would have to work through and win the appeals process.

Ted Wells, the investigator into the scandal, has vehemently defended his findings. In his report, Wells wrote Brady was "at least generally aware" Patriots staff deflated footballs. While that language sounds a bit loose, Wells isn't mincing words.

"If I were sitting on a jury and the judge had charged the jury that it should apply the preonderance of the evidence standard, I would have checked the box that said 'proven,'" Wells told reporters.

There's also the commissioner Roger Goodell factor. Goodell, in charge of handing down league suspensions, could be the one to hear this appeal and have final say on it.

"The most important thing here is 'was there a violation of the rules' and, if so, 'how did that occur," Goodell told Charlie Rose.

But that too could be tricky as Patriots owner Robert Kraft is part of the league’s compensation committee, tasked with ruling on the commissioner's salary among other things. They've been known to be pretty buddy-buddy in the past, though these recent events could change that.

Goodell has not yet announced if he or an arbitrator will hear the appeal or when a ruling could be expected.