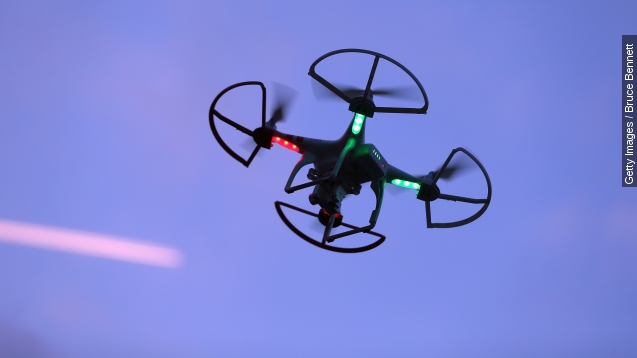 SMS
Tokyo Police Will Fight Drones With Drones
By Carter Woodiel
By Carter Woodiel
December 11, 2015
Police in Tokyo are mobilizing to stop illegal drone usage, and they plan to use drones of their own to take offending aircraft out of the sky.
SHOW TRANSCRIPT

To combat the possible threat of a new type of airborne terrorism, police in Tokyo plan to fight drones with drones.

A special new drone squad will be patrolling certain areas in Japan where flying drones is illegal, like over roads and near airports. Police will verbally warn the suspicious drone's pilot to ground the device immediately. (Video via The Verge)

If the drone stays in the air after the warning, things get more extreme. Police will use drones equipped with cameras and large nets to capture the intruding drone and pull it out of the sky.

Authorities are emphasizing drone containment as a way to prevent terrorism. In April, a drone with a radioactive substance in tow landed on the roof of the prime minister's office in Tokyo. (Video via The Asahi Shimbun)

Anti-drone drone usage isn't unique to Japan; in France a private company developed a net-wielding device for government use after drones kept popping up near popular landmarks. (Video via BFMTV)

But for Japan, France, and the rest of the world, policing drones can still be difficult, with technological advancements often outpacing nations' ability to update aviation regulations. (Video via Wellbots)

In the U.S., a special drone task force appointed by the Federal Aviation Administration recommended an Internet-based drone registry so drones performing illegal acts can be traced back to their pilots. (Video via PC Magazine)

But the FAA itself has yet to announce a decision on how a drone registry would be set up, including details like whether signing up a drone would come with a small fee.

Meanwhile, Amazon, one of the companies affiliated with the task force, is experimenting with using drones to deliver packages, though the company acknowledges that can't take place until the practice is approved by regulators, something that remains up in the air. (Video via Amazon)

This video includes images from Getty Images and Don McCullough / CC BY 2.0.