Toddlers Drinking Coffee? Why You Shouldn't Share Your Joe 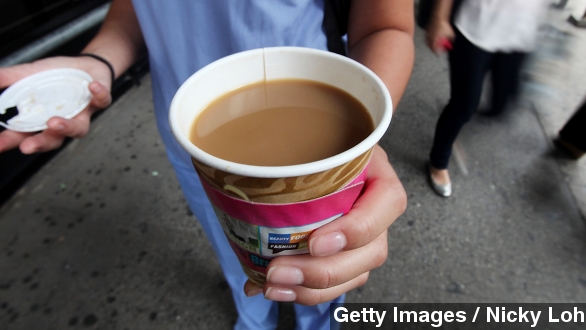 SMS
Toddlers Drinking Coffee? Why You Shouldn't Share Your Joe
By Ben Lawson
By Ben Lawson
March 5, 2015
A survey of Boston mothers and toddlers found that 15 percent of two-year-olds drink coffee and 2.5 percent of 1-year-olds.
SHOW TRANSCRIPT

One-year-olds drinking coffee? Well, as it turns out, it happens. A group of researchers found while some parents are having their morning cup of joe, they are sharing the drink with their toddlers.

The statistics about coffee consumption were discovered during a Boston Medical Center survey of 315 mothers and infants in the Boston area. Researchers studied infant weight gain and diet.

Researchers found that the toddlers were given between one and four ounces of coffee each day. (Video via Starbucks)

The trend could be associated with cultural practices. The study found that Hispanic mothers were more likely to give infants and toddlers the beverage. Girls were also given coffee more often than boys.

And previous studies discovered that children in Australia, Cambodia and Ethiopia sometimes drink coffee as well.

But young coffee drinkers may be in for more than a buzz. Coffee and caffeine consumption among children has been linked to depression, Type 1 diabetes, trouble sleeping, substance abuse and obesity.

A separate study has found that two year olds who drink tea or coffee had triple the risk of obesity by the time they entered kindergarten.

The Boston study only looked at mothers who had toddlers and infants in Massachusetts, but researchers say the trend could hold true for the rest of the U.S. as well.