Today's Prostheses Are More Capable Than Ever 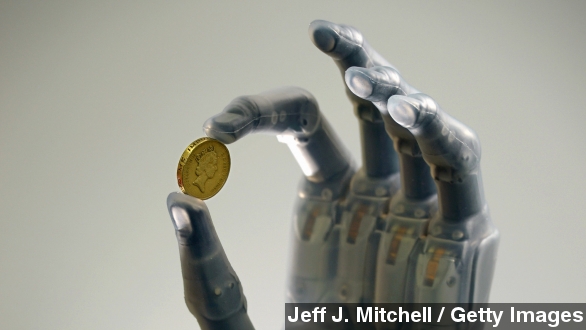 SMS
Today's Prostheses Are More Capable Than Ever
By Evan Thomas
By Evan Thomas
November 26, 2014
Advances in prosthetics are making replacement body parts stronger and more lifelike than they’ve ever been.
SHOW TRANSCRIPT

Prosthetic limbs used to consist of wood and rubber, with maybe a pulley or hook to restore manipulation lost with a hand.

But today's cutting-edge prostheses look — and feel — a lot different. Thanks to advances in materials, electronics and surgical procedures, researchers are making prostheses more functional and high-tech than ever.

With the latest synthetic hands, wearers can feel what they’re holding, thanks to touch sensors built into the fingers and palm.

They’re accurate enough to differentiate between different textures — sandpaper and velcro, for example — and sensitive enough for users to handle fragile fruit without damaging it. (Video via DTSciVids)

The latest bionic arms, like the modular limb from researchers at Johns Hopkins University, can be wired straight to the wearer’s existing nerves. This reduces the amount of conscious thought necessary to operate the hand.

Not everyone can say they have some of the most advanced legs on the market. But Hugh Herr can, thanks to the technology he and his team have developed.

“We’re at a point of history now where we’re going beyond just a normal human using a tool. Bionics is a seamless integration between human physiology and electromechanics.”

Herr’s BiOM prosthesis mimics the human ankle and foot. It uses custom springs, microprocessors and battery power to deliver more energy per step, and in an upcoming release, users will be able to customize their legs’ settings with an app — more or less power, depending on the activity. (Video via TED, BiOM)

But Herr tells Smithsonian he and his team are working on tapping into the nervous system for control, and they expect insurers will start to come around as high-end prostheses become more commonplace.

But these advances take time to get out of the lab, and brand-new technology isn't cheap. Many of the people who want or need prostheses can't afford them.

Some groups, like the Open Hand Project, are trying to figure out how to create low-cost, high-function prostheses, like this hand made from 3-D-printed plastic. It can't transmit sensations, but with a price point projected below $1,000, it’s much more affordable.

But replicating the subtlety and detail of human vision is a much more challenging — and expensive — endeavor.

Current retinal implants can only transmit basic shapes and flashes of light to the brain. Researchers tackling the problem in Australia say the tech needs higher resolution before it can come close to replacing vision. (Video via The Telegraph)

Still, the FDA approved an ocular prosthesis that restores limited sight in 2013.

The Argus II interprets footage from a video camera. A retinal implant sends the signals as light patterns to Larry Hester’s brain.

“The light is so basic and probably wouldn’t have significance to anybody else. But to me it’s meaning I can see light.” (Video via Duke Medicine)

But that’s not always the case, which The Boston Globe points out is an ongoing problem for prosthetics. “Medicare and private insurers can be reluctant” to pay up for top-end devices.

Proponents say they want to change that mindset. After all, these devices have the potential to make people healthier and more productive.

Again, as Johns Hopkins prosthetics engineer Michael McLoughlin tells NPR, it will come down to the widespread use of prosthetics.

“If you start using robots to help people out who are disabled, or who work in dangerous situations, and it's all the same technology, the volumes go up and that drives the price down.”

This video includes images from Adam Zubin for The Noun Project / CC BY 3.0 and Wellcome Images / CC BY 4.0.