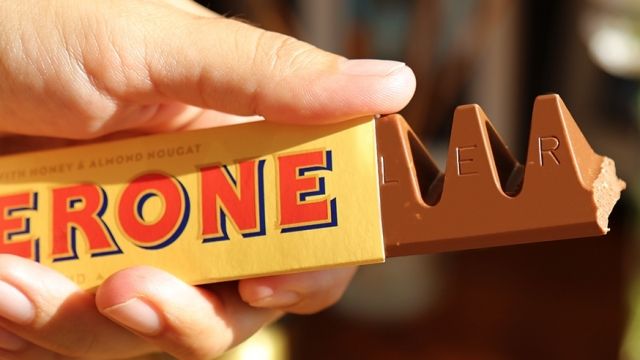 SMS
Apparently, You Should Not Mess With This Beloved Chocolate Bar

By Ryan Biek
November 8, 2016
The maker of Toblerone chocolate bars says some changes had to be made because of rising production costs.
SHOW TRANSCRIPT

A scary change is happening right now. No, not the new president of the United States. Toblerone bars in the U.K. are getting a makeover.

And loyal British customers are less than pleased.

The ingredients needed to make the iconic Swiss chocolate bars are becoming more expensive. To reduce the cost, Toblerone is changing the weight of two bars sold in the U.K.

The iconic Swiss milk chocolate bars with honey and almond nougat are easily recognizable with their triangular shape. The triangles are staying, but now the company is putting larger gaps between them to reduce the bars' weights.

Some are blaming Brexit for messing with their favorite candy.

Since the United Kingdom voted to leave the European Union, the value of the pound has dropped. Because the candymaker doesn't want to raise its prices, it has to cut costs somewhere else.

Toblerone said in a statement on Facebook the company absorbed the increased ingredient costs as long as possible.

However, a spokesman for the company told the BBC the decision "wasn't done as a result of Brexit."

The spokesman wasn't able to confirm whether the candy bar would only be changing in the U.K. market or throughout Europe.

Some customers argued that instead of making the gaps wider, the original bars should have just been made shorter to make them lighter.