Room Sharing Could Cut Infants' Risk Of SIDS In Half 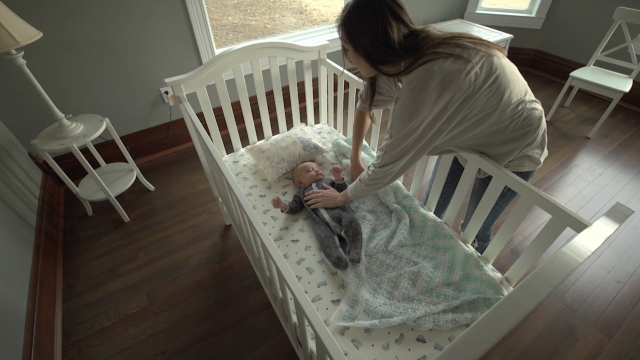 If you're stressing about getting a nursery finished before your baby is born, you can perhaps breathe a little easier now.

That's because the American Academy of Pediatrics now recommends infants sleep in the same bedroom as their parents, preferably until they turn 1 year old.

This doesn't mean infants should be sleeping in their parents' beds, though.

Instead, they should sleep on a firm surface, like in a crib or a bassinet. Parents should also remove any pillows, blankets and toys from the crib, so only the mattress, a tight-fitting sheet and the baby remain.

Researchers found doing so lowers the risk of sleep-related deaths, like sudden infant death syndrome or SIDS, by as much as 50 percent.

An estimated 3,500 infants die every year in the U.S. from sleep-related deaths, according to the Centers for Disease Control and Prevention. And about 90 percent of those deaths happen before the child is six months old.

SEE MORE: Breastfeeding Is Really Good For Babies, But Millions Can't Do It

And while breastfeeding has previously been found to help combat the risk of SIDS, the academy now says it should be done in a bed instead of on a couch or armchair if there's any chance you might fall asleep while breastfeeding.