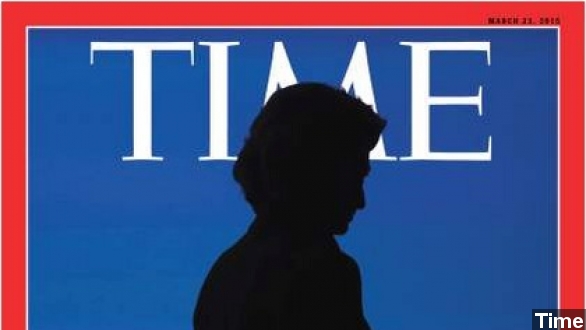 Who knew one pesky letter in the alphabet could cause so much trouble?

A silhouette of Hillary Clinton is featured on the cover of Time magazine's newest issue. And some on social media have been calling attention to the letter "M" in the header.

They say the way Clinton's head overlaps Time's logo makes her look like she has horns.

And at least one member of Time's staff has responded — looks like the Twitter talk spurred discussion.

A political reporter for the publication tweeted, "Actual discussion in the TIME office: 'That's not the way the horns would be.'"

And the "Fox & Friends" anchors got in on the technicalities of horns, too.

"As if they know. If we did see the devil, they'd be equally spaced across the skull," Brian Kilmeade said.

And Time also went on the offensive with this — a gallery pointing to numerous cover stars who have gotten so-called "horns," including Pope Francis, Prince Charles and Darth Vader — writing, "Any resemblance to cats, bats or devil horns is entirely coincidental."

Hillary's hubby, Bill, couldn't escape the dreaded "M" horns, either. So really, it's just all in the family for the Clintons.