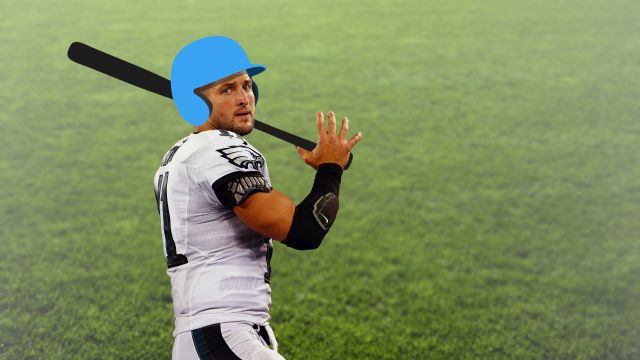 SMS
Here's How Tim Tebow's Audition For Pro Baseball Went
By Ryan Biek
By Ryan Biek
August 31, 2016
It's reported that all but two MLB teams sent scouts to watch him run, hit and field on Tuesday.
SHOW TRANSCRIPT

Everyone has an opinion about how former football star Tim Tebow did at his Major League Baseball showcase.

Only two MLB teams didn't send a scout to watch him run, hit and field on Tuesday.

Pretty much all the scouts agreed Tebow is a gifted athlete. He ran the 60-yard dash in about 6.7-seconds, which some say is pretty impressive considering his size.

But fielding was more of a struggle. The consensus was Tebow's arm is only strong enough to play left field. And he seemed a little uncoordinated when it came to catching fly balls.

Tebow showed his strength during batting practice, hitting several balls out of the park. Some scouts rated his raw power at the top tier among professional players.

In an added wrinkle, Tebow brought in two former MLB pitchers to throw over 90 mph at him in a simulated game. He got mixed reviews. For one of the pitchers, Tebow put four of the first 20 balls in play.

Tebow, now 29, hasn't played competitive baseball since high school. He became famous on the gridiron for his success at the University of Florida.

But then his mixed results in the NFL, open religiosity and the media spotlight made him a controversial figure.

Since leaving pro football, Tebow's succeeded as a TV analyst for the Southeastern Conference. Yet, he's looking to give that up for a shot at baseball.

"It's not about publicity. It's definitely not about money. It's a pay cut to do this, and for me, you pursue what you love, right?" Tebow said.

"He did well enough for someone to sign him to a minor league deal and invite him to instruction league," an ESPN analyst said.

ESPN reports five or six pro clubs met with Tebow privately after his showcase on Tuesday.