Tim Lincecum Is Back, But Is 'The Freak' Here To Stay? 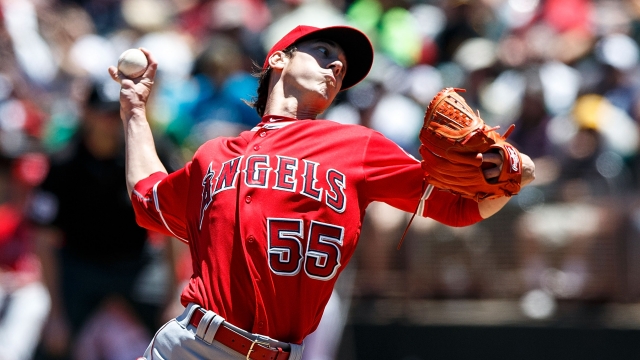 SMS
Tim Lincecum Is Back, But Is 'The Freak' Here To Stay?
By Carter Woodiel
By Carter Woodiel
June 19, 2016
The two-time Cy Young winner pitched six capable innings in his first start in nearly a year. Is it the first step in a return to stardom?
SHOW TRANSCRIPT

It's been awhile since baseball fans were buzzing about Tim Lincecum.

He won his second straight Cy Young award in 2009, before his ERA started ballooning and he was sidelined by injuries. But on Saturday, he started his big-league comeback.

Lincecum made his first start for the Los Angeles Angels, and threw six quality innings, allowing just one run and striking out two batters.

The Angels signed Lincecum a month ago, a couple weeks after he held a special open workout in an effort to get a team to pick him up. He was coming off of hip surgery and hadn't made an MLB start since June 2015.

The big issue for the 32-year-old has been his fastball velocity — simply put, he can't throw as hard as he used to. And even though he kept the A's at bay on Saturday, that problem persisted.

Lincecum's fastball topped out at 91 mph in that start, a far cry from the 99 mph he could reach in his 2008 heyday.

To be clear though, Lincecum did show some encouraging signs, namely keeping the A's to just four hits and limiting home run chances. And he threw more of his off-speed pitches to try to avoid his not-so-fast fastball.

But on the whole, Lincecum's 2016 debut might say more about the Angels than it does about him. The Halos have four starters out with injuries right now, and were in pretty desperate need for someone to come eat up innings, Freak or not.

This video includes clips from ESPN, Showtime, CSN Bay Area and the Fresno Bee and images from Getty Images.