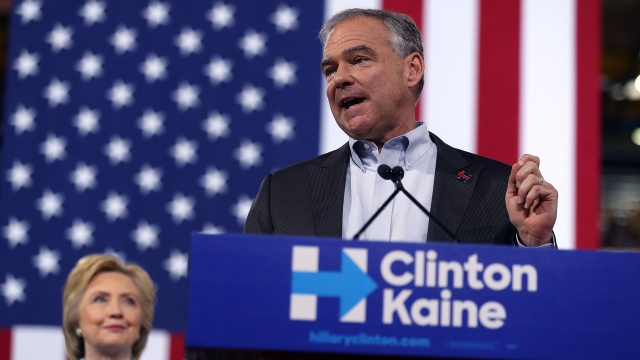 "I'm excited for us to get to know one another," Kaine said.

Kaine, who's also a former mayor of Richmond, spent most of his 37-minute speech introducing himself to the American people and discussing how his values pair with Clinton's.

"That's something else I've learned from my folks. Tough times don't last, but tough people do," Kaine said. Quoting President Harry Truman, Kaine then said: "America was not built on fear. It was built on courage, imagination and an unbeatable determination to do the job at hand."

Although some have called Kaine a "boring pick" or wondered whether he'd be an effective attack dog against GOP nominee Donald Trump, he certainly got in some zingers Saturday.

"You're right. He doesn't trash talk everybody. He likes Vladimir Putin," Kaine quipped after listing off people Trump has "trash talked."

"When Donald Trump says he has your back, you better watch out. From Atlantic City to his so-called university, he leaves a trail of broken promises and wrecked lives wherever he goes," Kaine told the crowd at Florida International University.

Kaine has a reputation of being a "nice guy." Shortly after Clinton announced her running mate on Twitter on Friday, Republican Sen. Jeff Flake tweeted: "Trying to count the ways I hate @timkaine. Drawing a blank. Congrats to a good man and a good friend."

Whether Kaine will become Clinton's attack dog remains to be seen. But she does have other surrogates, like Sen. Elizabeth Warren from Massachusetts and President Barack Obama, who have already gone on the offensive.